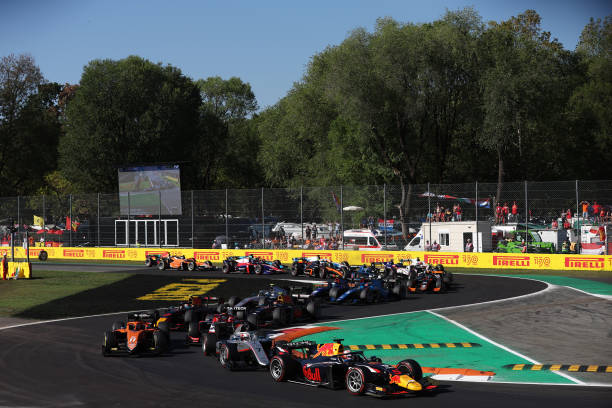 Who came out on top in the penultimate round of the 2022 Formula 2 championship?

Jehan Daruvala avoided the mayhem in a heavily disrupted F2 race to claim victory in Monza.

Following a chaotic F3 session and the withdrawal of Tatiana Calderon from the race, all eyes were on the F2 grid. Felipe Drugovich may be confirmed as champion, but the remainder of the standings still hung in the balance.

A disordered start in F2

Aussie star Jack Doohan started from pole position, hunting down his second F2 feature race victory. There was a tense moment before the race even began; as the formation lap got underway, he stopped on the grid. Thankfully, he managed to get going and made his way back to pole. It quickly became apparent that Doohan was having a problem with the clutch.

The polesitter successfully got off the line but had an abysmal start. As Drugovich improved to P3, Liam Lawson took the lead in the F2 race.

The opening lap was nothing short of frantic as the safety car came out after just a few corners. Initially, Ralph Boschung and Theo Pourchaire had a dramatic incident that saw them land in the barriers. As Boschung was tagged and rejoined the track, he bumped the Frenchman who spun off. Super-sub Luca Ghiotto was also involved, resulting in a DNF. This was shortly followed by contact between Doohan and Jehan Daruvala, which saw the Aussie sustain heavy damage and retire from the F2 race.

Just in case that wasn’t enough, Williams Academy driver Logan Sargeant and Campos’ Olli Caldwell were also forced to head back to the pits.

Drama ensues in the race down to Turn 1 and 2

Boschung and Pourchaire are OUT ❌

Doohan is slowly making his way back to the pits

All stopped cars have had their drivers exit the car#ItalianGP #F2 pic.twitter.com/V4iyacPRCA

Whilst many likely hoped to take advantage of some of the best F2 drivers retiring, Dennis Hauger was unable to do this. He was dealt a five-second time penalty as he lingered in 14th place.

As the safety car continued to neutralise the pack, Lawson led from Drugovich and Marcus Armstrong.

The safety car period came to an end on lap five of 30. Lawson controlled the restart beautifully, but he was nevertheless pursued by Armstrong who charged through from third place.

There were improvements for several F2 racers, most notably for Juri Vips as he passed Richard Verschoor for P4. After winning the Monza sprint race, he pursued another podium finish.

Just as the race seemed to settle, Calan Williams found the barrier after making slight contact with David Beckmann. Once again, the safety car appeared.

Those who started on soft tyres headed into the pits for their obligatory stop, which was a disastrous choice for Armstrong. Despite being the first into the pits, a poor stop saw him emerge in ninth position. It was revealed that he swerved into a bollard at the pit entrance, which would likely result in a penalty.

MP Motorsport elected to put Drugovich on soft tyres, which was a bold decision considering that there were still 21 laps remaining.

It then unfolded that the damage to the barriers at Ascari was extensive, so the race was red-flagged whilst it underwent repairs.

Whilst the drivers awaited the restart, race control handed Armstrong a 10-second time penalty for his earlier error. To make things even worse, he was then placed under investigation for speeding in the pit lane. In a harsh decision, the Kiwi was dealt a further 10-second stop/go penalty.

With just 14 F2 racers remaining, Verschoor led the pack on the restart. He retained the lead as Armstrong moved up to fourth position, passing a struggling Ayumu Iwasa. However, he rapidly headed back to the pits to serve his stop/go penalty.

It would be impossible to say that Monza is not ideal for overtaking; there were improvements aplenty throughout the field. Lawson and Vips battled ferociously for eighth place, resulting in a spin for Lawson. Unfortunately for the Red Bull-backed driver, he was shown the black and orange flag due to his front wing damage.

If you wanted more nail-biting moments, this F2 race was far from disappointing. Clement Novalak and Vips had a tense moment that saw both of them leave the track, and close battles could be seen throughout the field.

Meanwhile, Verschoor continued to lead the race over Marino Sato and Daruvala. However, as the top two had not changed their tyres, the net race lead belonged to Daruvala.

There was no let-up in this feature race, especially for Vips. He was given a 10-second stop/go penalty for the contact that ruined Lawson’s race. The day was going much better for Daruvala as he passed Sato to move up to P2 and continued to hunt down further improvements in an underwhelming season. Unfortunately for him, he was closely pursued by Frederik Vesti, who was also looking for his second win of 2022.

As Vesti crept up behind the Indian racer, he had the fastest lap achievement to his name. It was at this point that the race began to settle down, but it was far from over.

Daruvala hunted down Verschoor for P1, allowing Vesti to gradually close down the gap. Further back, Sato snatched the fastest lap after changing his tyres, but he was over 20 seconds outside the points-scoring positions.

Verschoor finally headed to the pits and Daruvala inherited the race lead. With five laps to go, Vesti was only nine-tenths back, but his tyres were evidently past their best. Behind them, Iwasa held up the pack and attempted to retain the final podium position.

The gap to Daruvala opened up to over two seconds, guaranteeing him victory. Down in 10th place, Verschoor took the fastest lap of the race on fresh tyres.

As Daruvala headed over the finish line, Iwasa successfully kept his third place despite coming under pressure from fellow rookie Enzo Fittipaldi.