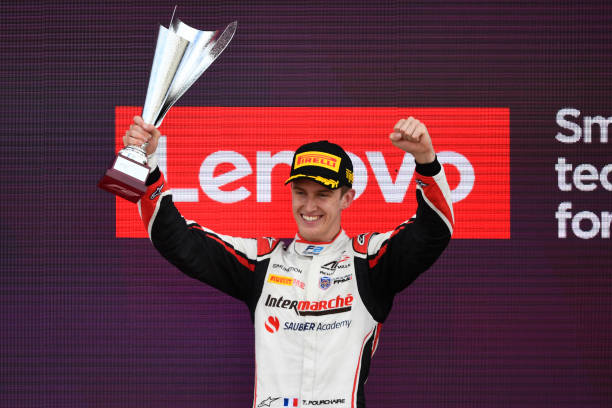 NORTHAMPTON, ENGLAND - JULY 03: Second placed Theo Pourchaire of France and ART Grand Prix (10) celebrates on the podium during the Round 7:Silverstone Feature race of the Formula 2 Championship at Silverstone on July 03, 2022 in Northampton, England. (Photo by Rudy Carezzevoli - Formula 1/Formula Motorsport Limited via Getty Images)

The Frenchman spoke to FormulaNerds over the weekend

Théo Pourchaire has reduced the championship lead by a few points at Silverstone. Throughout the weekend, the Sauber Junior Driver spoke to FormulaNerds about the British Grand Prix weekend, the busy month of July and being part of Sauber.

ART Grand Prix’s Théo Pourchaire came into 2022 after finishing fifth in the 2021 Formula 2 Championship. Racing with ART, Pourchaire was named as a strong title contender at the beginning of this season. Currently, he sits second in the Drivers’ Championship, but the point difference between him and the leader Felipe Drugovich has decreased slightly.

Heading into this weekend, Drugovich led by 49 points. In the Sprint Race, Pourchaire beat Drugovich by one point as he finished ahead in fourth. He added to this point increase in the Feature Race.

Pourchaire had a fantastic start from P4. Shooting straight down the middle of the track, he managed to get into P2 going into Turn 1. The positive start set up the excellent race as Pourchaire maintained that position all throughout the race and even towards the end he was putting pressure on Logan.

FormulaNerds asked Pourchaire how it felt to finish P2 today. The young driver said that “it’s amazing to be honest.” Once he achieved a great start, “the job was done” because he “knew that the start was very important in Silverstone.”

With regards to strategy, Pourchaire said he “did [his] best”. Comparing it to Logan Sargeant’s, he noted that the team “couldn’t do anything different than Logan because there was Liam, who pitted a lap before”. The Silverstone circuit is “one of [his] favourites” and having “maximised everything,” Pourchaire was able to take “pleasure in the car.”

The gap between Drugovich and Pourchaire in the championship has now been reduced to 42 points. We’re halfway through the 2022 season after Silverstone and the next six races are all European. July is particularly busy before the summer break with the next rounds all in the same month.

When speaking to FormulaNerds about the next few rounds of the calendar, Pourchaire said “this month is going to be really cool with very cool tracks.”

He added that after Silverstone, “Austria is amazing and very good for the races. Then France is my home race. It’s been a long time since I drove there, but I know the track so it’s good. And Hungaroring, last time I went there I won in F3.”

With the pace the car shows and the skills Pourchaire has, we could very well see him win in Hungary. If he does, that would add to his two current Feature Race wins already this season. He won in Bahrain, the opening round, and also in Imola.

FormulaNerds sat with Pourchaire after the Feature Race and caught up with him about F1. Pourchaire said that Alfa Romeo would be the most logical place to have an F1 Free Practice Session. The Italian team is linked with the Sauber. Pourchaire said:

“At the moment nothing is planned. I try to do some simulator and then the most important for me is to concentrate on F2 because the main goal is the F2 championship. Then we will see. Most probably, after Monza in September where there is a big break. Most probably there will be the best place to drive in F1, but at the moment nothing is planned.”

Pourchaire’s love for Silverstone helped him succeed so hopefully if everything goes smoothly next time out, we can see him back on the podium.