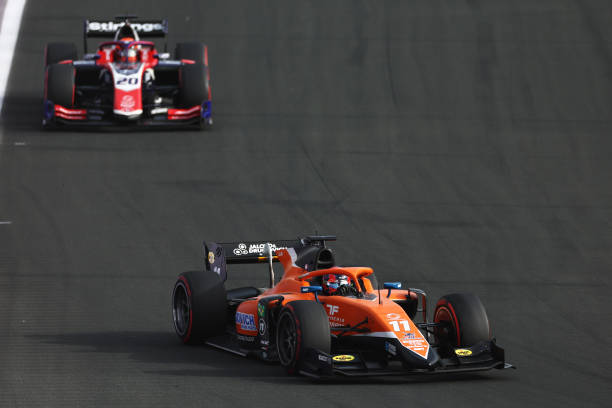 JEDDAH, SAUDI ARABIA - MARCH 27: Felipe Drugovich of Brazil and MP Motorsport (11) leads Richard Verschoor of Netherlands and Trident (20) during the Round 2:Jeddah Feature Race of the Formula 2 Championship at Jeddah Corniche Circuit on March 27, 2022 in Jeddah, Saudi Arabia. (Photo by Lars Baron/Getty Images)

In one of the less eventful sessions of the weekend, MP Motorsport’s Felipe Drugovich crossed the line ahead of Verschoor and Daruvala.

In a surprisingly straightforward start to Sunday’s feature race, the top three maintained their grid places.

Drugovich seemed to pull away early as he maintained a gap of almost a second over Verschoor in second place.

Meanwhile, it was a poor start for ART GP’s Frederik Vesti, who lost four places on the first lap and fell to the back of the order.

Contrastingly, last week’s feature race winner Theo Pourchaire had a mighty start, moving up from last to 13th in the first few laps.

Towards the front of the grid, Verschoor continued to drop in and out of the DRS window. He kept the pressure on race leader Drugovich as Iwasa and Boschung battled further back.

Many of the overtakes were carried out going into the first chicane, with several drivers cutting the corner throughout the race.

Tactics began to come into play as teams started to call their drivers into the pits. Drugovich came in on lap 8 after extending his lead to 1.7 seconds.

He dropped to 14th place as Verschoor attempted the overcut a lap later with a 30-second advantage over Drugovich.

Unfortunately, he was unsuccessful, emerging one position behind his rival who had moved up to 8th.

One driver who was even more unlucky was Liam Lawson, who had the impressive statistic of being on the podium at every race so far this season. His front left wheel was not properly secured, resulting in him being stranded in the pits.

He was the second driver to retire, as Pourchaire faced what appeared to be an electrical problem and was forced to abandon the race.

With only 10 laps to go, neither Jack Doohan nor Clement Novalak had pitted, despite being near the front of the pack.

Taking this strategy resulted in Doohan finishing just inside the points in 9th position. Novalak lost out, finishing down in 14th.

After leading the race for several laps, Dennis Hauger was brought into the pits. This promoted Drugovich and Verschoor back up to 1st and 2nd.

The main action occurred further down the racetrack, with an ongoing three-way battle. Juri Vips, Jack Doohan and Enzo Fittipaldi fought ferociously for the last of the point-scoring places; Fittipaldi was the one to miss out.

With just one lap to go, the yellow flag began to wave. The cause was Frederik Vesti, who had spun out and did not end up finishing the race.

Until that point, the feature race was the first session without any crashes or spins across the weekend.

Drugovich took a confident victory, crossing the finish line over 2 seconds ahead of Verschoor. Prema’s Daruvala grabbed the final podium place, with Jake Hughes finishing 4th. This was a significant result for Hughes after he was disqualified from yesterday’s sprint race for a technical non-conformity.

As a result of his remarkable win, Drugovich jumps up to first in the championship, pulling 11 points ahead of Liam Lawson.

The Brazilian driver took an extra point for achieving the fastest lap with a time of 1:43.578.

The full race results for round two can be found here.