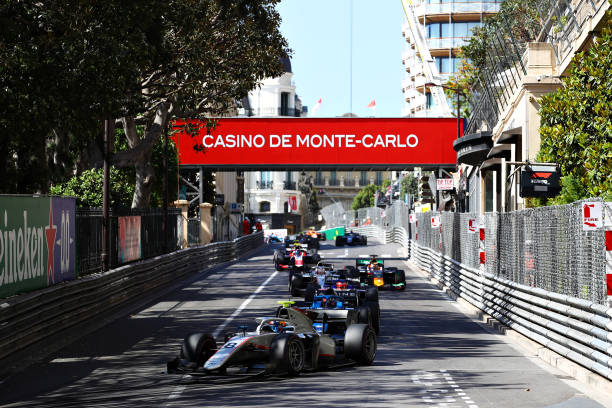 Following a momentary delay to the race start, the 21 drivers made their way to the grid for the 2022 Monaco feature race.

Campos’ Ralph Boschung missed yet another race as he sat out with ongoing neck pain.

Could it rain? Would there be any overtakes? Could Monaco produce an interesting race for once? It was all to play for going into round five of the championship.

Following a round of post-qualifying penalties for Liam Lawson, Ayumu Iwasa and Olli Caldwell, Felipe Drugovich was promoted to pole position. The MP Motorsport racer was hunting for redemption following a day to forget on Saturday when both he and teammate Clement Novalak retired.

Rival Theo Pourchaire joined him on the front row, 23 points adrift of the championship lead.

F2 in Monaco seems to be making a habit of having drivers not being able to leave the grid. After Jake Hughes stalled from pole position in the sprint race, both Liam Lawson and Roy Nissany failed to start the formation lap.

The championship leader made a name for himself for his dominant drives this season – today’s opening laps were no different. Drugovich had a perfect start, quickly pulling away from Pourchaire.

Yesterday’s winner Dennis Hauger saw the biggest improvement as he moved up from 9th to 5th place.

However, the Norwegian soon discovered why Monaco has become infamous for its lack of overtaking opportunities in recent years. The closest battle on the track was between Doohan in third, Vips behind him and Hauger in close pursuit.

With little happening on the track, the pitstops began as early as lap eight of 42 after the majority started on soft tyres.

A host of drivers headed to the pits, with VAR’s Cordeel and Prema’s Daruvala suffering botched stops.

Hauger was the first of the frontrunners to pit, emerging in 15th position. Whilst he set the race’s fastest lap, the focus turned to Doohan and Vips in their fight for third. Mere tenths separated the two racers.

19 laps in, a mysterious yellow flag appeared in sectors one and three. It was revealed that Cordeel had a nasty collision with the wall, bringing out a full safety car.

A slow stop for Drugovich offered a brilliant chance for Pourchaire to take the lead whilst still in the pits.

He was unable to convert this to a change in position, with Drugovich managing to emerge from the pits ahead of him.

The two faced an unusual issue as marshalls were pushing Cordeel into the pit exit. They initially appeared to park their cars before swerving past the retired VAR driver.

The safety car seemed to primarily benefit Juri Vips, who finally passed Doohan in the pits to take third place.

After birthday boy and safety car driver Bernd Maylander returned to the pits, Lawson made a beautiful move to get past Marino Sato at the Fairmont hairpin. Any other overtaking hopes were rapidly extinguished as another incident neutralised the race.

This will be a weekend to forget for MP Motorsport’s Clement Novalak. His race came to a premature end as another attempted overtake by Lawson saw Novalak end up in the barriers.

The appearance of a safety car often brings with it the promise of a thrilling restart. But you’ve got to remember that this is Monaco.

Less than a second separated Drugovich and Pourchaire, with Vips following close behind.

The Frenchman continued to heap the pressure on his rival, desperately searching for a place to overtake.

As Drugovich fought to hold off his rival, Vips and Doohan once again began to catch up, presenting the possibility of a four-way battle for the win.

As Liam Lawson dropped back, all eyes were still on the neck-and-neck battle at the front of the pack.

A rare overtake saw Daruvala move up into eighth position, with Drugovich and Pourchaire separated by just four-tenths.

The tension was palpable as Drugovich went wide on the penultimate lap, but his rival could still not find a way past. As a result, the order remained the same, with Juri Vips joining the front two on the podium.