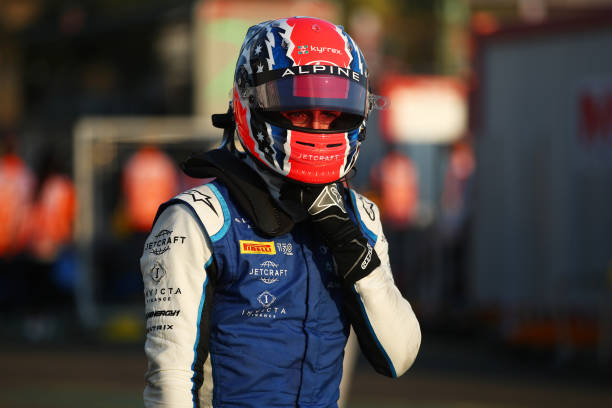 BUDAPEST, HUNGARY - JULY 29: Jack Doohan of Australia and Virtuosi Racing (3) looks on during qualifying ahead of Round 10:Budapest of the Formula 2 Championship at Hungaroring on July 29, 2022 in Budapest, Hungary. (Photo by Joe Portlock - Formula 1/Formula Motorsport Limited via Getty Images)

F2: Dominance and battles in the Sprint Race at Hungaroring

Jack Doohan went from pole to race victory in the Formula 2 Sprint Race at the Hungaroring in Budapest.

Formula 2 took to the track at the Hungaroring today for the Sprint Race of the 10th round of the 2022 season. In Friday’s Qualifying session, Ayumu Iwasa took pole position. Marcus Armstrong and Felipe Drugovich joined the Red Bull Junior in the top three.

However, for today’s Sprint Race it was Virtuosi Racing’s Jack Doohan who was on the reverse grid pole. The Australian was joined on the front row by Enzo Fittipaldi, who qualified P9.

The day started of with wet weather, but the track has since dried a bit after Formula 3 and Formula 1 both had on-track sessions. Drivers were anticipating a wet Sprint Race, but that is not the case.

The top three drivers in the championship lined up one after the other with Logan Sargeant leading the trio in P6. Théo Pourchaire sat behind in P7 and Drugovich in P8.

The fight was on as the lights went out, so here’s what happened in the Formula 2 Sprint Race.

Fittipaldi immediately got into the lead overtaking Doohan as the grid went into Turn 1. The opening lap then saw the lead change hands again as the Brazilian locked up, letting Doohan go through.

Yellow flags were waved as drivers spun on the first corner, bringing out the Safety Car before lap one was completed. Sargeant got sandwiched between Dennis Hauger and Drugovich, who was on the inside of Turn 1.

Sargeant and Drugovich had contact, resulting in another DNF for the American driver. Théo Pourchaire was caught out due to this incident as he was forced to go around Hauger’s car, dropping him back to P15.

With Hauger and Sargeant out of the race, only 20 drivers were in play. Doohan was still leading at this point, followed by Juri Vips, Fittipaldi, Drugovich and Frederick Vesti rounding out the top five.

When the safety car came in, Doohan foot his pedal to the metal to take the grid to full speed once again. He created a 1.7 second gap to Vips on the restart. The Estonian, however, was having to defend against Fittipaldi, who was trying to take back P2.

These two drivers had an incident at Turn 1. This caused them both to fall down the order to 19th and 20th, with the incident being noted by the stewards.

Unfortunately, Novalak suffered damage to his right front tyre. The Frenchman pitted and swapped his tyres to the softs. Nissany also pitted to fix an damage for him.

The conclusion of the stewards resulted in a 10-second penalty awarded to Novalak. He served the penalty on lap nine, proving some good race tactics for MP Motorsport if another safety car was to be brought out.

Battles on the grid

Doohan stretched his lead from the rest of the field, putting in fastest lap after fastest lap. But the battle for third was intense.

Vips was giving it everything to close the gap to F2 rookie Doohan, but Fittipaldi remained within DRS to the Hitech Grand Prix driver.

Fittipaldi’s tyres eventually were wearing off as the gap between him and Vips increased. He clung on to a P3 podium finish, with Drugovich still behind.

Pourchaire’s Charge Through the Field

Further down the field, Pourchaire was trying to claw his way through the pack to get back into the points. The Frenchman overtook Marino Sato on the inside of Turn 1, making his way into P13.

With five laps to go, Pourchaire was making his way through the field, overtaking Calan Williams. He then got past Daruvala into 10th place. Soon after, he got ahead of Olli Caldwell, just shy of the points.

The Hungaroring is notorious for being tricky to overtake on. And for Liam Lawson, it was even harder as he was stuck in a DRS train between Marcus Armstrong and Ayumu Iwasa.

Armstrong was putting the pressure on Jehan Daruvala and a lock up by the Indian driver allowed Lawson to join the fight. Daruvala held Armstrong off, but the Kiwi had much more grip on his tyres.

With 10 laps to go and sixth place on the line, Armstrong went to make the move on Daruvala. But contact was made between the two as they went into Turn 1. Daruvala couldn’t hold the car in and battle, resulting in him catching Armstrong’s rear right.

Armstrong went down to eighth as Lawson got ahead. However, Daruvala was given a 10-second penalty as a result of the incident.

Lawson makes an aggressive move on Daruvala down the main straight, causing the latter to lock up. Armstrong and Iwasa took advantage of the opportunity and all three sailed past the PREMA driver.

Richard Verschoor was having a battle with track limits. He received a black and white flag with 15 laps to go. At the time he was 10th in the order.

After another track limit infringement, it went from bad to worse. Verschoor was given two 5-second penalties. The Trident driver was the under investigation for not serving the time penalty correctly.

Olli Caldwell was also a victim of track limits as he was given a black and white flag with three laps to go.