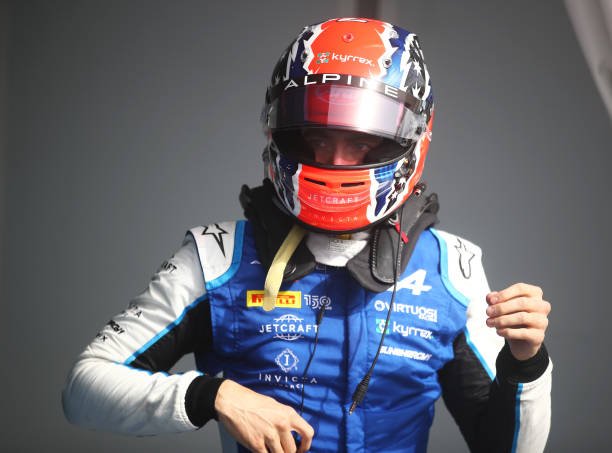 After being dropped by Red Bull, he's been able to further the tribute to his father

F2 racer Jack Doohan has shared his love of his helmet, which echoes that used by his MotoGP father.

Since 2019, the Virtuosi driver has had a similar design out of respect for his dad’s achievements.

However, he now has more space available for the tribute. This is possible due to his release from the Red Bull junior programme.

As a new member of Alpine’s driver academy, his helmet sees his father’s iconic red, white and blue colour combination sit alongside the F1 team’s logo.

Following last Friday’s qualifying session in Jeddah, Doohan said: “This year I had full reign of design for my helmet so I could take full advantage of my dad’s design and continue that legacy going, which I’m very proud of.

“I couldn’t ask for anything more.”

The MotoGP racer Mick Doohan used a similar design in the 1990s. Between 1994 and 1998, he won five consecutive championships in the series.

With his son following in his motorsport footsteps, the elder Doohan is evidently proud of the family legacy.

In 2020, he wrote: “Jack has a good work ethic. He’s always willing to up his game. He’s pushing himself to do his best and improve himself.”

By Jay Winter1 week ago

When questioned on whether his father was happy with the 2022 helmet, Jack replied: “He doesn’t say, but like when I think about changing up the colours and a different design – I had also black, blue and white as an option – and he was like ‘oh you know, the red, the white, just really stands out’.

“So I’m sure he wouldn’t say that, but deep down he definitely likes it in the OG colours and design.”

How is Doohan’s season going?

After coming second to Dennis Hauger in the F3 championship last year, Doohan is hoping to make his mark after progressing to Formula 2.

He is currently 14th in the standings with 6 points after an unfortunate second round in Saudi Arabia. Despite a promising start to the weekend, the Australian driver started at the back of the grid for both races. This was due to a technical infringement as his team could not supply the necessary 0.8kg of fuel after qualifying.

He managed to fight his way through the pack during Sunday’s feature race, taking home 3 points for the team.