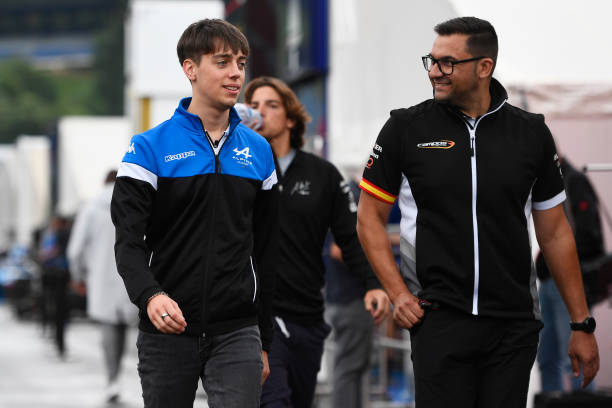 SPIELBERG, AUSTRIA - JULY 07: Olli Caldwell of Great Britain and Campos Racing (14) walks in the Paddock during previews ahead of Round 8:Spielberg of the Formula 2 Championship at Red Bull Ring on July 07, 2022 in Spielberg, Austria. (Photo by Rudy Carezzevoli - Formula 1/Formula Motorsport Limited via Getty Images)

F2: Caldwell just one penalty point away from a race ban

If Campos Racing’s Olli Caldwell gets one more penalty point, he’ll be banned from competing in the following round. FormulaNerds spoke to Caldwell about his situation and whether or not he thinks it’s fair.

It’s been a tough rookie season for Caldwell so far, who scored his maiden points with a sixth place finish in the Feature Race in Austria.

He picked up the first seven of his 11 penalty points during the Feature Race in Bahrain, the very first round of the season. During that race, he received two points for being out of position during the formation lap and another five points for track limits violations.

Caldwell again was penalised for impeding a driver in Qualifying. However, this time it was Marino Sato in Monaco. Then finally, in Austria last time out, the British driver received the 11th penalty point on his licence for track limits violations.

Should Caldwell receive one more point, he’ll be forced to serve a race ban. This is as per Article 39.3 of the Sporting Regulations. If he gets 12 penalty points during Free Practice or Qualifying, he won’t be able to compete for the rest of the weekend. If he gets the 12th point during a race, he’ll serve the ban for the following event.

Caldwell wouldn’t be the first driver to serve a race ban this season. His fellow rookie Amaury Cordeel missed out at Silverstone after he racked up 12 penalty points. No driver (before Cordeel) has had to serve this penalty since 2019. This was when Mahaveer Raghunathan famously managed to accumulate 12 penalty points twice in one season.

Ahead of the race weekend at Paul Ricard, FormulaNerds spoke to Caldwell about his focus regarding his potential race ban.

“Not getting that one point is my main focus,” said Caldwell. “I don’t entirely agree with what those points were given for, but I can’t change it, so I’m just trying not to get any extra ones.

“We have these driver briefings where things are gone through, some tracks more than others. I think Austria – not from my side but from others – was difficult for track limits. I think Paul Ricard will be a bit easier, but it’s not any driver’s focus to go out and accumulate points.”

Caldwell will undoubtedly have to tread carefully, not just this weekend but for the rest of the season. Any slip up could mean missing the following event. Penalty points are taken away at the end of the season, which leaves six rounds for Caldwell to potentially receive a ban.