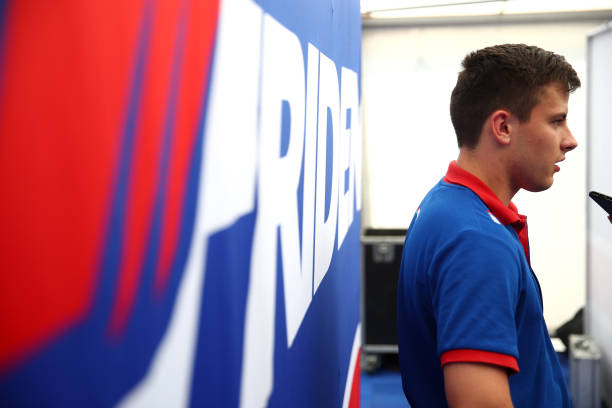 LE CASTELLET, FRANCE - JULY 21: Calan Williams of Australia and Trident (21) talks to the media in the Paddock during previews ahead of Round 9:Le Castellet of the Formula 2 Championship at Circuit Paul Ricard on July 21, 2022 in Le Castellet, France. (Photo by Joe Portlock - Formula 1/Formula Motorsport Limited via Getty Images)

The Australian is leaving before the end of his rookie season

Trident announced that Calan Williams is leaving the team before the final round of the Formula 2 season.

Following the first 13 rounds of Williams’ rookie Formula 2 season, he’s moving on from Trident. He cited professional reasons, stating that he felt it was the best move for his motorsport career.

Williams scored his best result with the team in the Jeddah Sprint Race, finishing fourth. It was his only points finish of the season, although he finished just outside the points on a number of occasions.

In fact, in 24 of the 26 races Williams contested, he finished between the positions of 11th and 18th. Outside of those races, one was his fourth place and the other was a DNF in the Feature Race at Monza. Williams is one of just a few drivers to only have one retirement on his record this season.

Williams is currently 23rd in the standings. His Trident teammate, Richard Verschoor, is in 13th place, having scored the first win of the season and taken more consistent points finishes.

“Throughout the season, I know I demonstrated my capability at Formula 2 level,” Williams said in his statement. “Jeddah was a great result and I have been very pleased with many of the races I have put together in my rookie season, often finishing just outside the points or experiencing misfortune when running inside the scoring positions.

“However, these things can happen in racing, and as the season progressed circumstances just did not fall my way. We are now at a point where it is important that I consider what is the best path for me to pursue in the interests of my ongoing career in Motorsport.”

Trident’s team boss Giacomo Ricci’s statement said, “It was a pleasure to have the opportunity to work with Calan Williams in Formula 2. After 13 rounds, a fruitful working relationship with the Australian rookie ends, which has given Trident Motorsport the opportunity to appreciate a man, a professional, and a driver of indisputable value. Trident Motorsport wishes Calan Williams and his management the best of luck in the upcoming professional challenges.”

Williams has yet to announce what’s next for his career. His Trident replacement also has not been announced yet. There’s still a month until the final round in Abu Dhabi, plenty of time for Trident to find a driver to race in his car.