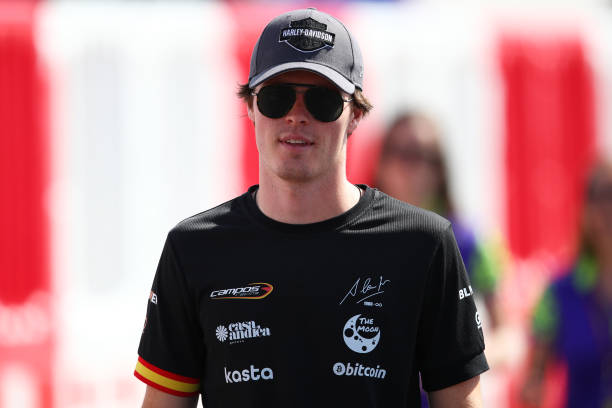 BARCELONA, SPAIN - MAY 19: Ralph Boschung of Switzerland and Campos Racing (15) walks in the Paddock during previews ahead of Round 4:Barcelona of the Formula 2 Championship at Circuit de Barcelona-Catalunya on May 19, 2022 in Barcelona, Spain. (Photo by Joe Portlock - Formula 1/Formula Motorsport Limited via Getty Images)

Campos Racing has announced that Ralph Boschung will not be taking part in Round 4 of Formula 2 after pain in his neck inhibited his ability to perform.

According to the Campos team, Boschung began experiencing “significant” pain in his neck after the third round of the championship at Imola. While he initially thought he would be fine to race at Barcelona, the pain did not go away.

Following Free Practice this morning, Boschung decided the pain was not allowing him to race to his best ability. Therefore, ahead of Qualifying, the team released a statement saying that Boschung would not be competing for the rest of the weekend at Barcelona.

“The Swiss driver began to have significant neck pain after Round 3 in Imola,” the team said in the statement released on Twitter.

“However, he was confident he would be able to race this weekend, but after today’s Free Practice he realised that he could not drive at the best of his abilities and has decided to withdraw from the event and focus on his recovery to try to be 100% for the next round in Monaco.”

Boschung has stated that while this choice was “difficult to accept”, it was the right thing to do.

“I have already set up a recovery plan for the next few days and hopefully I will be able to recover to race in Monaco next weekend. I want to thank my team and my sponsors for supporting me fully on the decision and wish my teammate best of luck this weekend.”

Boschung also stated on Twitter that today was “a very tough day.”

As this decision was made last minute, it’s too late for Campos to find someone to replace Boschung. Therefore, Olli Caldwell will be the sole driver for the team this weekend, and the #15 car will remain in the garage.

“Obviously the team fully supports his decision and wishes him a quick recovery,” said Campos. His recovery will have to be quick if he wants to be ready to race for Monaco, as Formula 2 will be racing there next weekend.

Should Boschung still not feel able to compete by next weekend, the team will likely look for someone to drive in his place. For now, the team will hope for a good result from Caldwell to limit the damage of only having one car in the battle.