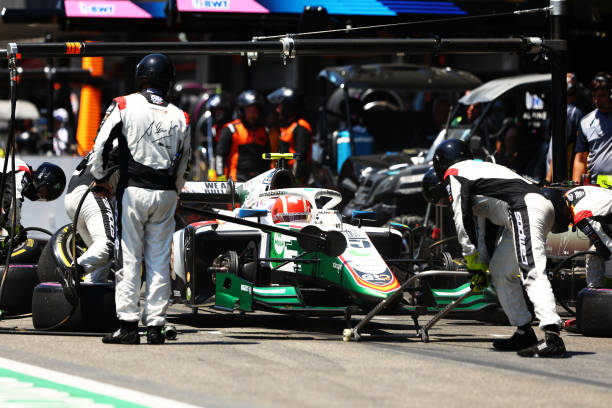 BAKU, AZERBAIJAN - JUNE 12: Ralph Boschung of Switzerland and Campos Racing (15) makes a pitstop during the Round 6:Baku feature race of the Formula 2 Championship at Baku City Circuit on June 12, 2022 in Baku, Azerbaijan. (Photo by Clive Rose/Getty Images)

After an eventful Feature Race, the drama continued off track with post-race penalties.

Following on from Dennis Hauger’s dramatic first Feature Race win, the drama continued post-race as penalties were dished out.

Amaury Cordeel was the first to the stewards after being investigated for his collision with Olli Caldwell at the beginning of the Feature Race. After the stewards’ investigation, Cordeel was found as the guilty party. This sees him face a three-place grid drop at the next race he competes in. The Van Amersfoort Racing driver also received a penalty point. This added to his record taking his total to 12 penalty points.  As a result, Cordeel is suspended from Round Seven at Silverstone in accordance with Article 39.3 of the FIA F2 Sporting Regulations.

Drama both on and off the track

Another collision during the Feature Race occurred between Cem Bolukbasi and Roy Nissany. Consequently, both drivers ended up in the wall and out of the race. After investigation, the stewards found that Nissany was “wholly at fault”. The DAMS driver will face a three-race grid drop at Silverstone as well as a penalty point added to his record.

Nissany took to his team radio after the collision saying “Sorry guys, we have an idiot on track.”

The off track incident

The drama didn’t stop there. There was an off-track altercation between Yavuz Bolukbasi, Nissany and Francesco Martinez (Nissany’s trainer). The documentation by the FIA states “After an on-track incident between Cars 16 and 23 the father of the driver of Car 23 Mr Yavuz Bolukbasi, along with the driver’s manager went to the DAMS Paddock tent.”

The document goes on to say that “Mr Bolukbasi admitted that he lost his his temper when he thought that the driver of Car 16 made a derogatory comment about his son.”

By Samuel Coop17 hours ago

It then moves on to address the commotion stating “At the DAMS tent Mr Bolukabasi provoked a heated verbal exchange with the driver of Car 16. As the verbal
exchange escalated the trainer for Roy Nissany became involved and there was some pushing and physical contact between the father and the trainer (Francesco). No punches were exchanged and the unwanted guests were removed from the area.”

As a result, Cem Bolukbasi is required to pay a fine of 5000 euros within the next 48 hours. In addition to this, his father Yavuz Bolukbasi will have his credentials removed for the next round at Silverstone.

Campos racing also received a fine after having seven-team personnel on the pit wall. The number permitted is six, meaning the team breached the rules.  As a result, the team have been handed a 2000 Euro fine. In addition to this, an 8000 Euro fine has been suspended for the remainder of the season unless a similar offence is committed.

Formula 2 returns at Silverstone for Round Seven (1st-3rd July)

Felipe Drugovich extended his championship lead in Baku this weekend. But will the Brazilian be able to hold on at Silverstone? And will we see more drama both on and off track?