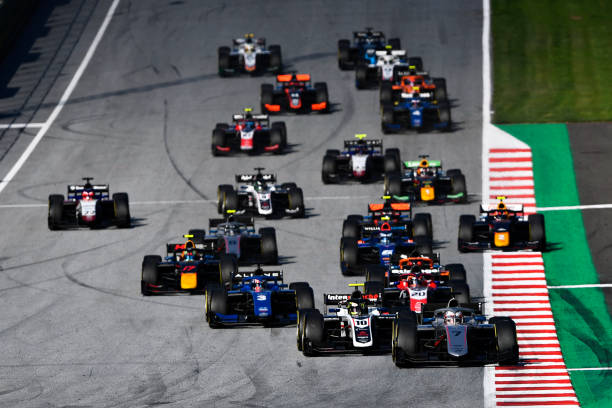 Track limits were prominent in Austria

Marcus Armstrong masterfully dominated the Austrian sprint race to take his second win of the season.

With the top 10 finishers from Friday’s qualifying session reversed, polesitter Marcus Armstrong had nothing to lose.

Issues plagued Carlin’s Liam Lawson before the Austrian sprint race even began. As everyone set out on the formation lap, he stalled on the grid, resulting in a pitlane start.

Armstrong got the best start off the line in the fifteenth race of the year. As Pourchaire chased him, there was a three-way battle behind for third position. However, the majority of the action was further back. In Felipe Drugovich’s pursuit of fourth position, Ayumu Iwasa almost collected him.

Meanwhile, Richard Verschoor’s hopes of achieving his third podium finish of the season fell out of his grasp. Both Jack Doohan and Drugovich passed him, dropping Verschoor down to fifth.

The field remained relatively close together in the Austrian sprint, but Red Bull junior Marino Sato was unable to take advantage of this as he retired.

Luckily for the frontrunners, they were facing better fortunes. Championship leader Drugovich hunted down third-placed Doohan, remaining within a second of the Aussie driver.

Although there was a more significant gap between race leader Armstrong and Theo Pourchaire behind him, their sector times were practically identical.

Now in his third year in Formula 2, Armstrong hoped to claim his second victory of the 2022 season. On lap 11 of 28, the gap to Pourchaire was nearing two seconds.

Further down the field, the fastest man on Friday in Austrian qualifying received a harsh reminder of track limits rules. After the harsh regulations significantly impacted qualifying, they returned to punish Frederik Vesti. He was dealt with a five-second time penalty as he sat in ninth position.

However, this was nothing compared to what was rapidly becoming an Austrian nightmare for Liam Lawson. A trip off the track triggered a virtual safety car which momentarily neutralised the field. The Carlin driver quickly found his way back onto the circuit, bringing out the green flag before he later retired.

Track limits rules reared their head again, this time coming for both Pourchaire and Amaury Cordeel. Pourchaire was shown the black and white flag, meaning that one more infringement would earn him a time penalty.

With 10 laps to go, the race appeared to calm down slightly. Race control scrutinised Pourchaire’s creative interpretation of track limits, leading to ART nervously waiting for news of a penalty.

The gap to the race leader Armstrong consistently stayed around 1.7 seconds, but the New Zealander became yet another driver on the verge of a time penalty.

As Pourchaire focused on driving legally, Doohan rapidly caught up. But it was Ollie Caldwell in 19th place who was arguably under the most pressure. His numerous track limits infringements meant that one more would hand him a race ban as his penalty points crept up.

There was more bad news for Pourchaire – he will be investigated after the race for track limits.

On the final lap, the yellow flag emerged in sector one after the penalised Roberto Merhi lingered at the edge of the track. However, this did not phase Armstrong as he crossed the line in first place, followed by Pourchaire and Doohan.