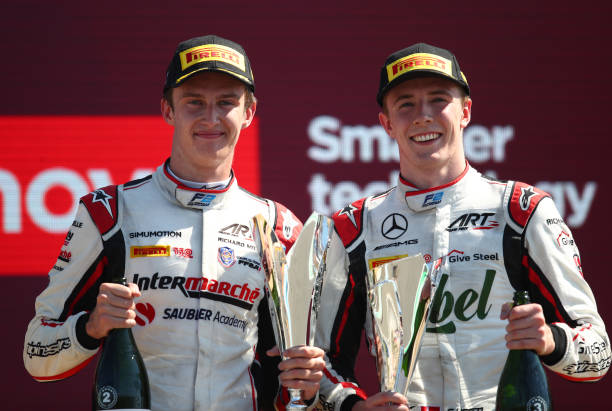 F2: ART’s double podium shows they have “what you need in a team to move forward”

Today’s Formula 2 Feature Race saw ART Grand Prix have a successful Sunday with both Pourchaire and Vesti on the podium.

Formula 2’s round nine in Le Castellet at the Paul Ricard circuit was a home race for two teams on the grid. DAMS and ART Grand Prix were both looking to have a successful weekend in France. Fortunately, the two teams could celebrate their results today.

DAMS’ Ayumu Iwasa started the Feature Race in second, behind pole sitter Logan Sargeant. Within the opening lap, the Red Bull Junior took the lead after Jack Doohan had an amazing start, both getting ahead of Logan Sargeant.

Iwasa dominated the race, pulling ahead and having a great restart after the Safety Car. The DAMS driver went on to get the race victory, which was his maiden F2 win.

For ART Grand Prix, the Feature Race, whilst it lacked a race victory, had something better. It saw both their drivers, Frederick Vest and Théo Pourchaire, score a podium finish.

This total of 33 points puts the team at the top of the Teams’ Standings. As for the Driver Standings, Vesti now sits in eighth on 75 points. Pourchaire is back up to second on 134 points, with Sargeant now in third.

After the Feature Race, FormulaNerds spoke to both drivers about their Sunday performance and looking ahead to Hungary.

Théo Pourchaire was very pleased to have scored a podium at his home race. In the Sprint Race yesterday, he did secure another podium but after receiving a five-second penalty, he was classified as finishing P7.

The Frenchman reflected on all three days, saying it’s been a “crazy weekend” with some “good memories for the future.” With regards to the penalty he received, he accepts the stewards decision but “in [his] heart”, he still has “two podiums.”

A key part of Pourchaire’s race today was the strategy. He told Formula 2 that ART’s “strategy was very good” as he “tried to pit earlier” and managed to overtake “three or four cars.” Commenting on tyre management, Pourchaire said there was “not a lot of tyre manage today”. The main thing was that the “traction [of the car] was a bit difficult to manage.”

For Vesti, however, approaching the Feature Race was a little different. The Finn didn’t get much, if any, practice time on track at all before Qualifying on Friday. He said that achieving his maiden F2 Feature Race podium is “very important”.

He fought back in Qualifying and in the races, but in the Sprint Race Vesti admitted that the key was to be “prepped” for today. He added that there was “not so much pressure” yesterday, so it was more like a “practice race on the prime tyre.”

Speaking to FormulaNerds, both drivers thanked ART Grand Prix and commented on the progress as a team.

Vesti said “ART keeps surprising” with the work they achieve. Pourchaire noted that the team “have the pace to be at the top every session.” So far this season, they’ve achieved only one pole position and three race victories.

However, both drivers are optimistic that they can “carry this momentum” from today forward. The next round is at the Hungoraring for the Hungarian Prix.

Pourchaire reflected and said that previously, ART have been “pretty fast in the past there.” Combined with the pace of the car and how “incredibly hard” everyone works, they are hopeful they can replicate a good result. Vesti admitted that within the team, him and “Théo are also good at pushing each other.” He said:

“This is what you need in a team to move forward.”

The championship is very competitive this year, with several drivers battling for pole positions and race wins each round. Felipe Drugovich is still leading, but Pourchaire and Sargeant aren’t far behind.

For ART Grand Prix, will we see them have a good result next weekend and extend their points over the other teams?