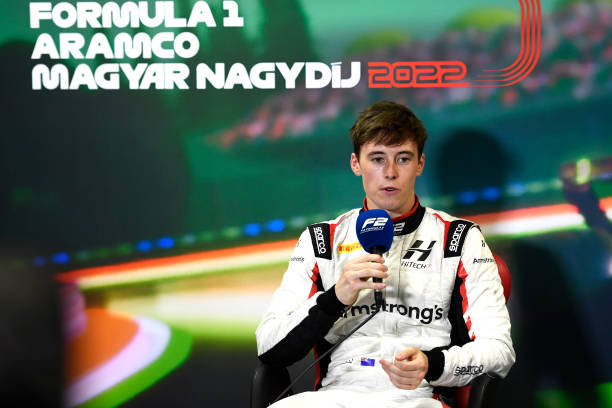 BUDAPEST, HUNGARY - JULY 29: Second placed qualifier Marcus Armstrong of New Zealand and Hitech Grand Prix (7) talks in the press conference after qualifying ahead of Round 10:Budapest of the Formula 2 Championship at Hungaroring on July 29, 2022 in Budapest, Hungary. (Photo by Rudy Carezzevoli - Formula 1/Formula Motorsport Limited via Getty Images)

F2 Armstrong: “Need to stay focused” after some unlucky results

Marcus Armstrong told FormulaNerds what he needs in order to have success this weekend, after some unfortunate Feature Races.

Marcus Armstrong is in his third campaign in the FIA Formula 2 championship. 2022 got off to a mixed start for the Hitech Grand Prix driver.

In the opening rounds in Bahrain and Saudi Arabia, Armstrong retired from both Sprint Races. However, the Feature Races produced more results as he finished fifth in both.

He went on to see the chequered flag in every consequent round until Austria. At the Red Bull Ring, Armstrong retired once again after winning the Sprint Race on Saturday. Paul Ricard was “out of [his] control” as he suffered an “electrical problem”, but it saw him miss out on some crucial points.

Currently, Armstrong is 10th in the Driver Standings, three points behind Ayumu Iwasa, who secured pole position in Qualifying at Hungaroring. He spoke to FormulaNerds after the qualifying session that saw him celebrate his birthday with a P2 result. He talked about his focus this weekend, coming into Hungary from two consecutive DNFs.

Armstrong reflected on his Feature Race retirement in France last weekend, saying that “it has no relevance to what’s happening this weekend.” When speaking about what his focus will be in the races, to make sure that he sees the chequered flag at the Hungaroring, the Kiwi said:

“We need to stay focused and make sure that we get everything that we want to do. We need to make sure we get a good start, make sure the tyres are in the right window.

All the very simple things and eventually a result will follow. I don’t want to think about luck, nobody does really.”

Formula 2 didn’t race at the Hungaroring last year in 2021. But, the championship did have a round in Hungary in 2020, which was Armstrong’s first full season in Formula 2.

That year he finished the Sprint Race in fifth, but suffered a DNF in the Feature Race after contact with Artem Markelov. With his time in the championship, Armstrong certainly has the experience to aid him in getting good results.

Formula 3 saw an eventful wet race with two safety cars. The competitiveness of Formula 2 could result in several safety cars as well, but if rain persists and we see a wet race, anything can happen.