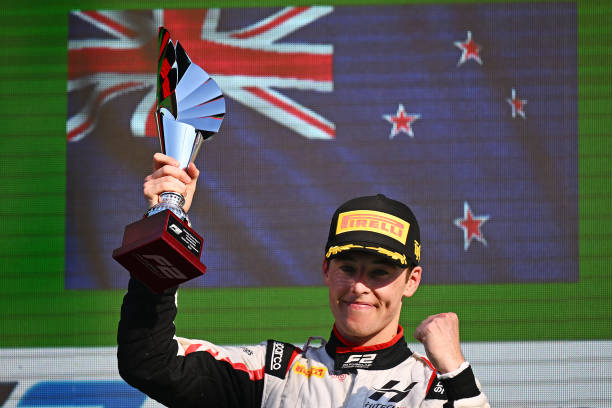 ZANDVOORT, NETHERLANDS - SEPTEMBER 03: Race winner Marcus Armstrong of New Zealand and Hitech Grand Prix (7) celebrates on the podium during the Round 12:Zandvoort Sprint race of the Formula 2 Championship at Circuit Zandvoort on September 03, 2022 in Zandvoort, Netherlands. (Photo by Clive Mason/Getty Images)

Another Formula 2 driver is making the switch to American racing

Armstrong will be replacing seven-time NASCAR champion Jimmie Johnson at Chip Ganassi. Johnson is stepping back from full-time IndyCar racing after two seasons with the team.

The young Kiwi will partner Scott Dixon, Marcus Ericcson, and Alex Palou in the #11 car. He’ll race in 12 of the 17 out of the season, and another driver (yet to be announced) will take over the car for the five oval races.

“I’m ecstatic to be a part of the IndyCar Series but especially with Chip Ganassi Racing because it is such an iconic and successful team,” Armstrong said. “I have an extraordinary opportunity in front of me to learn from people that have been performing at the absolute highest level in this sport.

“As a Kiwi, I’ve always watched Scott Dixon succeed in the championship with this team, so on a personal level this is quite special for me. I am a hard worker that looks to improve every single day. With the knowledge and personnel that this team has, I’m very excited to take on this new challenge.”

Armstrong is coming off the back of his third Formula 2 campaign. Having switched from ART Grand Prix to DAMS Racing, to Hitech Grand Prix, it’s been a tough couple of years for him. While he enjoyed his most success this past season, taking three wins throughout the year, he finished 13th overall, for the third year running.

He’s the third Formula 2 driver to officially make the switch to IndyCar in the past two years, joining his former F2 teammate Christian Lundgaard and former fellow Ferrari junior Callum Ilott. Both drivers have been a symbol of success for other Formula 2 drivers looking to make the switch. Lundgaard was named IndyCar’s Rookie of the Year in 2022, and Ilott has had some impressive results as well.

During the season Armstrong was one of several drivers to take part in an IndyCar test at Sebring. He tested with Dale Coyne Racing, piloting Takuma Sato’s #51 car. His Formula 2 teammate Juri Vips was also at that test with Rahal Letterman Lanigan Racing. Vips doesn’t seem to be in the running for an IndyCar seat next year but hasn’t ruled out making the switch yet.