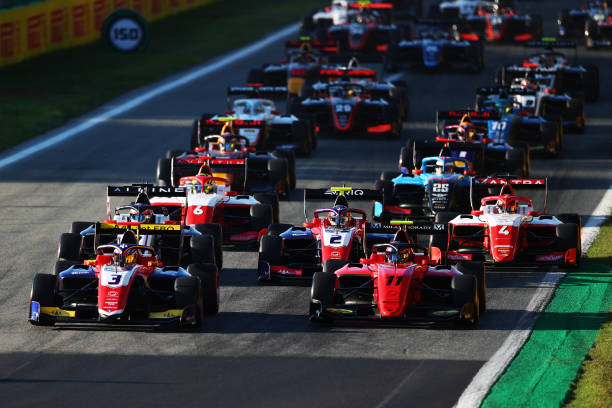 F2 and F3: Five more driver confirmations for 2023 in the lower formulas

The FIA Formula 2 and Formula 3 championships have confirmed five more drivers for 2023 with VAR and ART Grand Prix filling their seats.

It’s the winter break for Formula 2 and Formula 3 but teams are still announcing their line-ups for the 2023 seasons.

Richard Verschoor, who raced for Trident in 2022, has switched teams for his next Formula 2 campaign. For 2023, Verschoor will race for Van Amersfoort Racing.

He tested with VAR during the post-season testing in Abu Dhabi. The testing “instantly confirmed” for Verschoor the team’s “extreme determination to further grow” and he believes that “suits [his] attitude very well!”

“I am extremely excited to return to the F2 grid again in 2023 and I am really happy to do so with Van Amersfoort Racing. It is special to be able to announce this on my 22nd birthday as well! As both myself and VAR have grown a lot during last year in F2, I feel very confident about the upcoming season.”

The CEO of VAR, Rob Niessink, also expressed the positivity around Verschoor joining the team. He said, “it is special to have a talented, Dutch driver” as part of their team, especially as they are a Dutch team. Niessink said Verschoor brings “raw talent and race craft” as well as “valuable F2 experience to the team”.

Alongside Verschoor, VAR will a Formula 2 returnee in their ranks with Juan Manuel Correa.

Correa raced in Formula 2 in 2019, but after the tragic events of Belgium, he had yet to return. But for 2023, after a one-off race with VAR in F2 this year and completing the post-season testing for them, Correa will race full-time in Formula 2.

Correa joins the Dutch team feeling very grateful for the opportunity. On his return to the championship, Correa said: “Being back full-time in Formula 2 means more to me than most people can imagine.

“It is not just an achievement in itself to be on this grid, but it also is a realization of a goal that has been the epicentre of my efforts for the last three years, so it is a very emotional achievement.”

“I am very hungry, I am very motivated, and I know the team is as well.”

He is positive that he and Verschoor can “create a great working environment” and “help the team improve” in 2023.

Correa and Verschoor complete VAR’s line-up for 2023. They finished in 10th in their first season in Formula 2. Will they be able to score more points in 2023?

Formula 3 announced today that Kaylen Frederick will be switching teams to race for ART Grand Prix. The American completes the line-up at the French team.

“I am very happy to be joining ART GP for the 2023 FIA F3 season. It’s extremely exciting to be a part of such a prestigious team, and to see what the future holds for our collaboration.”

Driving for ART GP will be Frederick’s third team in his Formula 3 campaign. Back in 2021, the American raced with Carlin Buzz Racing initially.

Frederick participated in the post-season testing in Jerez with ART. He said that these initial on-track outings with his new team were “promising”. Frederick then said he couldn’t wait to build on the relationships with the team and his performances “over the winter and throughout the coming season.”

“Kaylen confirmed the talent we thought he had during the Jerez tests, and we are confident in his ability to exploit his full potential with ART Grand Prix.”

Philippe also believes that Frederick will be a “double asset in a long and complex season, during which the team will aim to confirm its good results in 2022.”

Before Frederick was announced, ART Grand Prix also announced the signing of Nikola Tsolov. Tsolov will be joining the French team for his first full season in Formula 3.

The Bulgarian made his single-seater debut in 2022. He raced in the Spanish Formula 4 Championship and took the title as well as having 13 race wins to his name.

Formula E: The teams that surprised us in the Diriyah E-Prix weekend

Speaking about graduating to FIA Formula 3, Tsolov expressed his excitement. He said:

“It’s a pleasure for me to be stepping up to FIA F3 next year with ART Grand Prix. They’ve been very successful in every championship they’ve competed in and a lot of F1 drivers have been a part of the team. So, I’m super happy to start our journey.”

The likes of George Russell raced for ART when he competed in the feeder series. With ART’s history of success, and two experienced teammates in Frederick and Grégoire Saucy, Tsolov will be able to learn a lot.

Sébastien Philippe echoed the positivity surrounding Tsolov’s signing to the team. Philippe said Tsolov showed “his ability to adapt quickly and well to a new environment as well as getting the most out of the car” in his debut for the team and the championship in the post-season testing.

“His natural speed is reinforced by a great thirst for learning and by remarkable seriousness and determination for such a young age.”

With ART completing their 2023 line-up, Carlin Racing have just announced their first driver. The British team, who has seen the likes of Lando Norris and Logan Sargeant race for them, has now signed Hunter Yeany.

Next season will be his second full season in Formula 3. At the end of the 2022 season, Yeany was able to race in Monza after having to miss out on seven races due to an injury. The American also completed the post-season testing for Carlin after the season had finished.

Speaking about his move, Yeany said:

“I’m really excited to announce that I will be racing with Carlin in Formula 3 next year. Carline was the first team I ever tested with in Europe, so it feels like a bit of a coming home! Let’s rock it in 2023!”

Trevor Carlin, Team Principal of Carlin, echoed Yeany’s excitement. He said the team are “really happy” to have Yeany join them and they “enjoyed working with Hunter in the post-season test, it was nice for us to have a driver with some experience of the FIA F3 car to give us some direction.”

“We feel Hunter has far more potential than he has shown, especially because he missed a handful of races due to injury last year. I know that we will be able to hit the ground running come pre-season testing in Bahrain.”

There are still seats left on both the Formula 2 and Formula 3 grids for 2023 that need to be announced. Who will fill them?