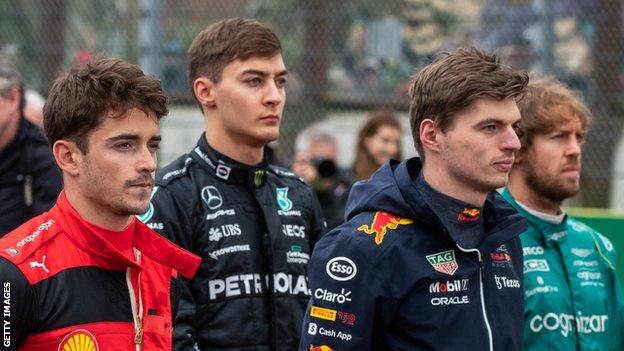 Two-time Formula 1 World Champion Max Verstappen hasn’t stopped winning after scooping up the fan-voted International Racing Driver of the Year Award for the second time in a row at the 2022 Autosport Awards. Retiring Sebastian Vettel took home the Gregor Grant Award for his lifetime achievements in motorsport, whilst George Russell claimed the Moment of the Year award for his first F1 Grand Prix victory.

Verstappen, who scored a record-breaking 15 wins from 22 races in 2022, took out the award for the best racing driver in 2022. The Dutchman claimed the prize ahead of F1 Ferrari rival Charles Leclerc, IndyCar champion Will Power and Formula E title winner Stoffel Vandoorne.

The 25-year-old didn’t attend the ceremony but addressed the award show via a video message.

“Thank you to all the fans who voted for me for the second time in a row, coming alongside my second world title in a row.

“After a tricky start to the year, it was a real team effort to turn it around.

“All the hard work of the team, including some people sitting with you at the awards tonight, all deserve a big thank you. Have a good night and see you on the track in 2023.”

Vettel was honoured with the Gregor Grant Award, a prize that not only recognises his four Drivers’ World Championships but also the work he has achieved off track. The fan-favourite has signed off his F1 career with 53 Grand Prix wins, 122 podiums and 3501 laps led.

In his acceptance speech, the German said he was “not sure what‘s next” in store with his life post-F1, however, he’s “very excited about it.“

“I thought 10 years ago, ‘That’s normal, it’s how everybody lives their lives’. But then I found out it’s not normal and a lot of people don’t have that privilege,” he said.

“You have so much motivation from the inside of you coming out and to meet so many skilled men and women along the way and have fun. There’s so much that I took from these years.”

“It‘s not that I hate Formula 1, I enjoyed the last couple of races.“

“After the [retirement] announcement, it was a big weight off my shoulders because it‘s been a whole that this sport was in my head and I‘m very much looking forward to giving the time that I got when I as that age [to my children].

“My parents made so much time for me and I want to be there as well.”

George Russell’s first full F1 season with Mercedes ended with the Englishman claiming his first Formula 1 victory. The Brit won the Moment of the Year award for his victory at the São Paulo Grand Prix. Russell won the award ahead of Max Verstappen’s record-breaking 14th win in Mexico, Nyck de Vries’ points in his debut drive for Alpha Tauri and Ross Chastain’s epic wall-ride NASCAR overtake.

“It was an incredible moment for me personally, the journey that the team had been on in that season,” said the Briton.

“We had the golden opportunity in the Brazilian Grand Prix. The race was pretty under control and the safety car came out, I saw Lewis behind me and I thought this is not going to be straightforward.“

The Chinese driver also addressed the award show via a video message: “Hi guys, as you can see I just won Rookie of the Year.”

“Thanks to everyone who supported me and voted for me.

“I’ve been battling through the year, it has been a tricky year, but I’ve had great support from the track and from fans at home so thank you all very much.”