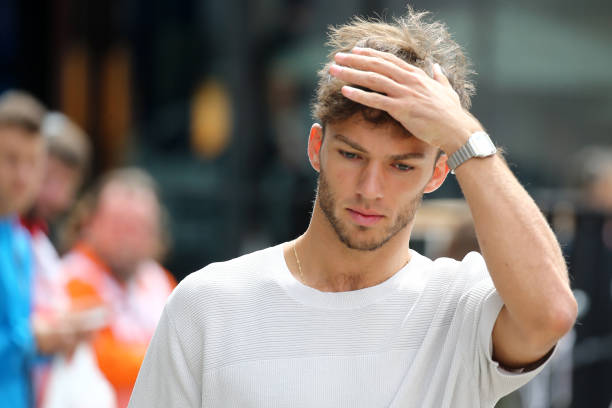 Pierre Gasly ‘working on final details of the contract’

Has the French accidentally revealed his new F1 contract?

AlphaTauri driver Pierre Gasly has been caught by Ferrari’s YouTube channel saying that he is “still working on the final details of the contract” as rumours swirl that the Frenchman is on his way to Alpine to replace the Aston Martin-bound Fernando Alonso.

In Ferrari’s YouTube video: SF Full Access – 2022 Belgian GP | Getting back down to work, Gasly is captured speaking to George Russell and Charles Leclerc.

“I’m still working on the final details of the contract…” 🤔 😳#DutchGP #F1 https://t.co/RUuFMPr6T4

With axed McLaren driver Daniel Ricciardo and Gasly favourites to replace two-time world champion Alonso for the 2023 season, the Aussie will be praying that Gasly is not talking about a contract at Alpine.

In 2019, Gasly was demoted back to Red Bull’s sister team AlphaTauri after an unsuccessful spell alongside Max Verstappen. Despite the setback, the Frenchman outrageously overperformed back at the Italian team, winning his maiden grand prix in Monza.

Although it was Gasly’s dream to earn a spot back at Red Bull, the Frenchman’s incredible performances have failed to impress Christian Horner enough to hand him his seat back.

The 26-year-old has endured a tough stint in 2022, accumulating only 18 points so far this season, mostly thanks to a far less competitive car than he’s used to.

Since young F1 talent Oscar Piastri’s publicly dramatic contract denial on social media, refusing to race with the French team for 2023, a door has now opened at Alpine.

Gasly will back himself to land a seat alongside fellow Frenchman Esteban Ocon. However, it won’t be an easy task. Daniel Ricciardo has history with the French team that dates back to when the team wore black and yellow and were called Renault. Ricciardo picked up two podiums at Renault, finishing fifth in the drivers’ standings in 2020.

Despite everyone’s hopes that Gasly has exposed himself on Scuderia Ferrari’s channel, earlier on in the season, Red Bull advisor Helmut Marko said:

That would mean a move for the Frenchman might be further away than we think.