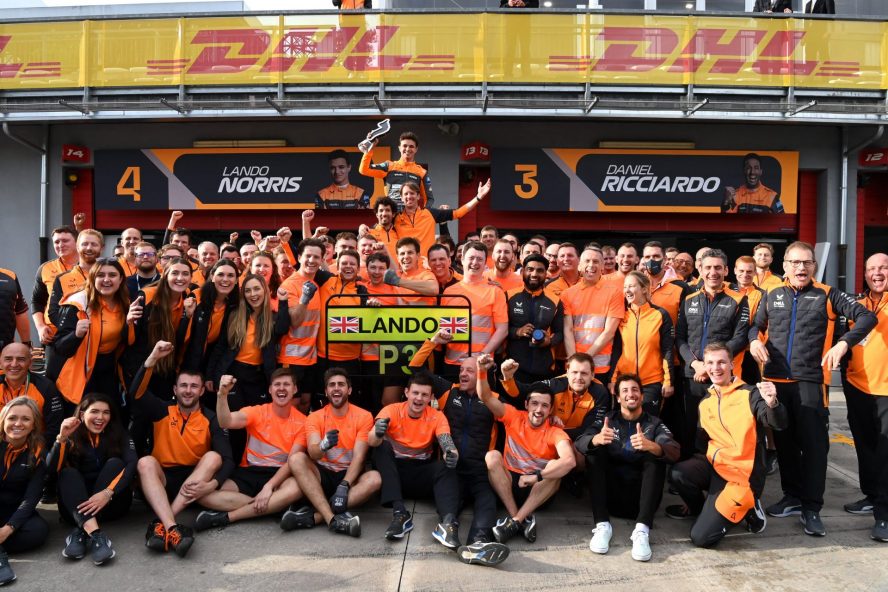 McLaren driver Lando Norris has hailed his team’s “hard work and effort” after beating out championship leader Charles Leclerc to third place in Imola as the Briton scored his first podium of the season.

The 22-year-old thrived in the wet conditions in Italy, helping deliver another set of crucial points for McLaren as they look to make up ground in the constructors’ championship after a horrific start to the season.

Norris was ecstatic with the result and didn’t fail to hide his appreciation for the team’s efforts to help hand him his second podium finish in a row at the Imola Grand Prix.

When asked about the secret to their miraculous comeback in form, the Englishman put it down to the team’s determination and his love for a wet track.

“You know, just a lot of time and effort everyone’s putting in back in the factory, and everyone here.

“A mixture with these tricky conditions this weekend. So we’ve been able to capitalise on that as well.

“I love these conditions. So I always do quite well, the same last year pretty much, so a mixture, you know, just hard work and a great weekend and it all pays off.”

The boy from Bristol continued his praises for the team.

“[It was] an amazing race and amazing weekend and to be honest,” said Norris post-race.

“I’m happy! The team deserve it, from nowhere in race one to now scoring a podium.

Whilst McLaren were celebrating the fact that they are now fourth in the constructors’ championship with 46 points, they will be disappointed in how their driver Daniel Ricciardo’s race in Imola.

Riccardo’s questionable start to the Grand Prix saw the Australian take out Ferrari’s Carlos Sainz as he sent the Spaniard spinning off into the gravel.

Despite being able to continue the race, the former Red Bull driver suffered damage from the incident in lap one and was unable to gain any places. The Aussie finished a point-less 18th.

Norris and Ricciardo will be looking to the papaya’s red hot form when they travel out to the brand new American track in Miami.