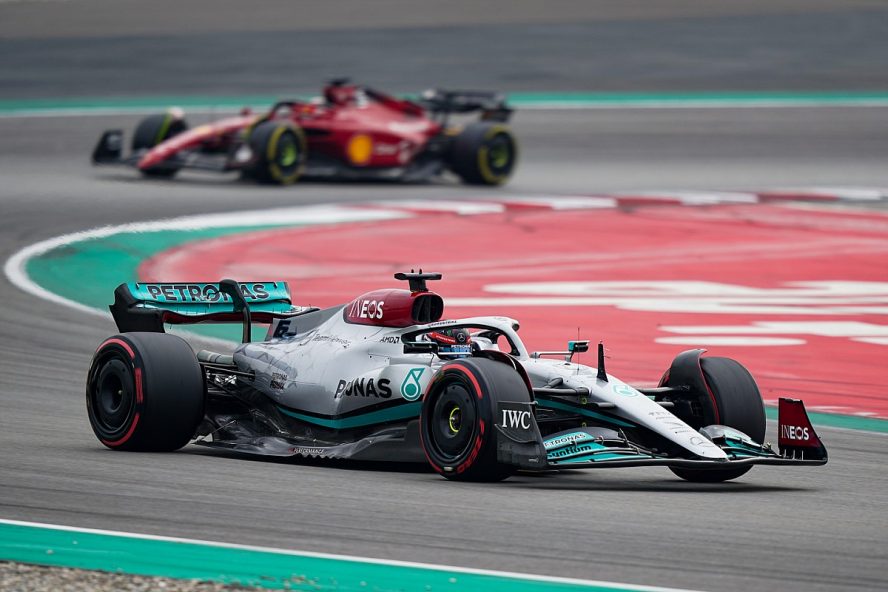 Mercedes are putting their new upgrades to good use as they wedge their way in between the Ferraris of Charles Leclerc and Carlos Sainz in Spain.

The new W-13 floor is proving to be a game-changer for the Silver Arrows as George Russell and Lewis Hamilton went second and third fastest in the Catalunyan sun only 0.117s and 0.204s behind the Monagasue despite being on hard tires.

Leclerc remained the fastest in Spain with a 1:19:670 as he continued to flex the Prancing Horses’ upgrades. Carlos Sainz was three tenths off his teammate’s pace as he looks to grasp his first pole at his home Grand Prix.

Max Verstappen went fifth fastest after being 0.336 seconds off the pace whilst his Mexican teammate Sergio Perez finished the session nearly a second off the pace in seventh behind Fernando Alonso who put was 0.533 behind Leclerc.

Sebastian Vettel finished eighth fastest with a time of 1:20:703. Aston Martin’s new upgrades have raised a fair amount of concern amongst the teams as their new car r

Alpha Tauri’s Pierre Gasly who initially struggled with traction managed to gain control of his AT03 and take P11 with a time of 1:20:917, putting the Frenchman ahead of Kevin Magnussen and Lance Stroll. Gasly’s teammate Yuki Tsunoda was 3 tenths behind in P14.

Lando Norris ended his practice session early after understeering into a gravel pit, damaging the floor of his freshly upgraded McLaren. Meanwhile, Daniel Ricciardo drove an unupgraded MCL36 which saw him take P15.

Alpha Romeo struggled to find speed after a new set of upgrades which coincided with Bottas finishing his session early after a puff of smoke saw the Finn end his session prematurely in P16 ahead of his teammate Zhou Guanyu.

A multitude of updates this weekend have made tomorrow’s qualifying unpredictable, the battle of the midfield will certainly be something to keep an eye on as Alpine and Aston Martin are looking to fight their way back up.