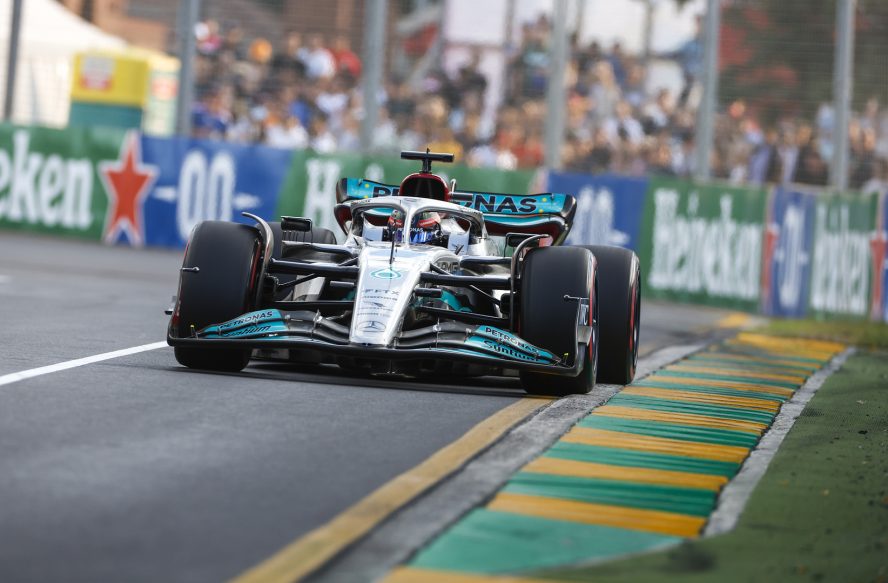 Lewis Hamilton has unleashed his frustrations towards Mercedes F1’s 2022 car, labelling the W13 a “rattlesnake” due to its unpredictability in the corners. The Brit qualified P5 in Melbourne alongside his teammate George Russell in P6 after the pair were able to capitalise on the misfortunes of Carlos Sainz and Fernando Alonso.

The Silver Arrows unsurprisingly struggled yet again to keep up with the pace set by Ferrari and Red Bull as the German giants continue on their lacklustre start.

The new updates brought to Albert Park in Melbourne prioritise a lot of straight-line speed, highlighting the porpoising issue that Mercedes are facing this year, with their number one driver clearly unhappy about the issue.

“I’d say this era of car is the worst for porpoising that I’ve ever experienced,” stated the seven-time world champion.

“If the ride height is going high/low, high/low, when you turn in you never know which position you’ll catch it in.

“The car, could oversteer or understeer depending where you catch it.

“Driving it is a real challenge, it’s like a rattlesnake!”

His teammate also piled onto the Mercedes complain train, expressing his concerns with the porpoising.

“It was bouncing around a lot today which was really limiting into the fast corners which was where I was losing all my time,” said Russell.

I’ve not been overly comfortable in the car this weekend so I was pretty happy qualifying where we did.”

Whilst happy that Mercedes managed to out-qualify quicker opponents, Toto Wolff admitted the real challenge will arise tomorrow when the Silver Arrows will be tasked with keeping a set of hungry Spaniards behind them.

“That was a good result for us today,” said the Mercedes team principal.

“In fact, we probably slightly over-performed with P5 and P6, because I think Alonso would have been ahead of us without his crash.

“Tomorrow’s race will be a different challenge again, protecting the tyres will be important.

“But when you consider the challenges we are facing at the moment, the team worked very well to extract everything from the car after two difficult practice sessions yesterday.”

Mercedes will be looking to gather plenty of data on their W13 tomorrow during the Australian GP whilst also trying to stay within reach of the championship so they can bounce back later on in the season.

Well ahead of the #USGP at the amazing @COTA , this note is to remind @ZBrownCEO of his promise to offer @MarioAndretti to drive a 2022 @McLarenF1 car.