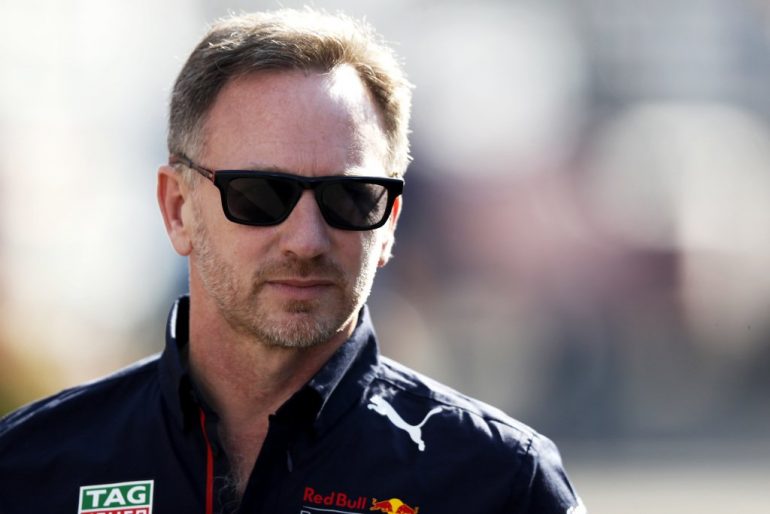 Is Horner suggesting Hamilton is exaggerating back pain?

Christian Horner says if Red Bull were suffering from porpoising then he would tell his drivers “to bitch as much as they could”.

Red Bull team principal Christian Horner believes rivals may be encouraging their drivers to “bitch” about porpoising health issues on the team radio in order to ​​make it “as big of an issue” as they possibly can after Lewis Hamilton struggled to exit his car in Baku after complaining about back pain during the Azerbaijan GP.

The Englishman’s comments come after Mercedes driver George Russell suggested the FIA need to look over the ground-effect aerodynamic regulations which have played a big role in causing the Mercedes car to bounce. Whilst Ferrari and Mercedes have been copping the brunt of the phenomenon, Red Bull Racing have mastered their engineering strategy, seeing the Austrian-based team pull away in the fight for the Drivers and Constructors’ Championship.

Although Mercedes pulled off a miraculous race to finish third and fourth behind a Red Bull 1-2, thanks to a double DNF for the Ferraris, their star driver Lewis Hamilton appeared to be in agony during the race. The seven-time World Champion complained about back pain caused by the bouncing, resulting in the Brit struggling to exit his W13 after the chequered flag.

Speaking to the media after the race, Hamilton described his discomfort in Azerbaijan.

“I just got through that race on adrenaline, biting down on my teeth through the pain,” he said.

“I can’t express the pain that you experience, especially on the straight here.”

Horner is not having it

Despite the Silver Arrows boss Toto Wolff saying Hamilton’s injuries are severe enough to put his participation in Canada at risk, Horner isn’t quite buying the drama from the Mercedes camp.

When Horner how he would approach a dire porpoising issue at Red Bull, he responded:

“I would tell them to bitch as much as they could over the radio and make as big of an issue out of it as they possibly could.

When the Brit was questioned on whether he believed it was the teams that were encouraging the complaints, he replied: “Of course it is”.

Horner believes that if Mercedes were genuinely concerned about Hamilton’s and Russell’s well-being then they would simply raise the ride height of the car, instead of prioritising car performance.

“The easiest thing is to raise a car. Every team has the choice to do that,” Horner told the media

“You have a choice where to run your car, and you should never run a car that’s unsafe.”

“I think that’s more for the technical guys because certain cars have issues and there are some teams that have very few issues.

“You can see it’s uncomfortable. There are remedies to that, but it is to the detriment of the car performance. So what the easiest thing to do is to complain from a safety point of view.

“I think if it was a genuine safety concern across the whole grid, then it’s something that should be looked at, but if it’s only affecting isolated teams, then that’s something that team should potentially deal with.”

Mercedes will want to get their bouncing issues finally under control before travelling to Canada otherwise their drivers may experience another excruciating 90 minutes on the tarmac.