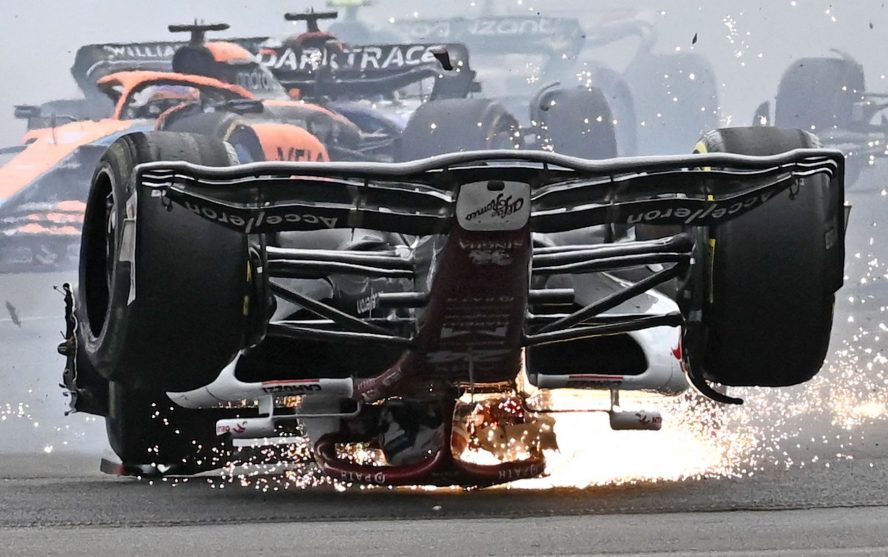 Alfa Romeo rookie Guanyu Zhou says he “didn’t realise” that his horrific crash at turn one in Silverstone left him stuck between the barriers.

The Chinese driver’s car was flipped over after making contact with Mercedes driver George Russell, seconds after the lights went out at the British Grand Prix.

Zhou’s C42 skidded across the gravel trap at Abbey before clipping the tyre barrier which sent him hurdling towards spectators before being caught by a catch fence, which placed him upside down.

The 23-year-old managed to escape the brutal incident unscathed thanks to his halo, and his quick thinking.

“Obviously when the flip happened, the first thing I was trying to do was trying to release my hand off the steering wheel,” he explained.

“Because you never know, you can break your wrist very easily with a crash like that.

“The next thing I tried to do, while I was just rolling on the ground, I knew I’ll be facing a massive impact coming up, because the car wasn’t stopping. And then I tried to lock myself in a position that is the safest possible, just waiting for that last impact.

“It’s not like I was just holding the hand backwards, but keeping it reasonably in tension, so it doesn’t get flying around when you have that last impact.

“Basically, I was just waiting for the last stop hit. And once I was basically stopped, I didn’t know where I was, because I was upside down.”

Zhou recounted a liquid leaking, he was immediately concerned about the possibility of a fire.

“The next thing I felt was basically there was leaking,” he said.

“I wasn’t sure if it was from my body, or from the car.

“So I just tried to switch the engine off, because the engine was still on by then. Because I knew if a fire starts, it will be difficult to get out.

“I had to kind of slide myself a little bit out,” Zhou explained, “so at least to have my leg, my feet already kind of out and on the top of the seat. And they were able to pull me out.

“But then looking back then obviously I saw the Halo saved me for that.”

Although the halo saved his life, a vital part of his car gave way a bit too easily, the roll hoop. Zhou explained that the force experienced in the highspeed crash was more than what qualifies it during safety tests.

“I didn’t know what happened, who hit me, because I was going straight next to the white line before Turn 1, and then suddenly there was a massive shunt,” he said.

“With that first impact, where it landed on the first flip, the team is still doing an investigation,” he said.

“But I think the first hit was much harder than what they test for the safety test. This was like a few times harder than the actual numbers we want in that.

“So obviously, that’s probably created the problem that came up straight away.”

The Shanghai-born driver dreaded the length of last Sunday, saying that he wished he could’ve just gone home and chilled out before focusing on the next race in Austria.

By Morgan Holiday5 hours ago

“You just want to go back home just to chill a bit, because I was covered in dust.

“There was so much dust after the impact. So I just wanted to go home, have a shower and just relax.

“Already on Sunday, I watched the race back. I didn’t feel sick watching it, or have that feeling.

“So I feel like I was able to kind of digest it a bit myself, so I was happy just to have one day off, and straight back into checking my physical condition the next day on Tuesday back home.

“For me, it wasn’t a concern. Obviously there’s times when you do something and you need a bit of mental help. But this time I don’t feel it was needed.”

“Sunday night I was texting all my engineers asking is my seat okay,” he revealed.

“For drivers obviously the seat is very important, it’s very comfortable. So I don’t want to change something, because they always can be different, even though they tried to do the same.

“But apart from that, I’m just quite happy to have like a back-to-back race.

“If you have a summer break just after that, it would be terrible because you will be under pressure, you’ll be thinking about it, repeat the crash again.

“Even though you try to avoid it, you somehow find it somewhere, it’s good to be straight back in.”

The first-ever Chinese Formula One driver will be aiming to secure his third points haul of the season under Alfa Romeo as Formula One heads to the Alps for the Austrian Grand Prix.