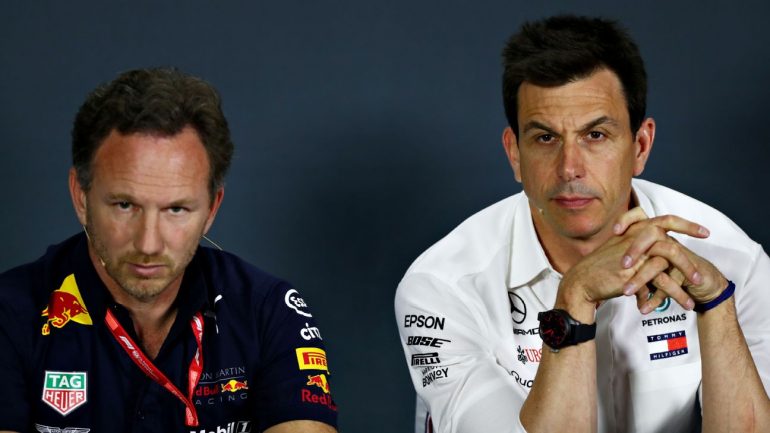 Red Bull Racing team principal Christian Horner has suggested that Mercedes AMG Formula One team were fed inside information from the FIA ahead of the Canadian Grand Prix to help fix their porpoising issues.

The comments come after a technical directive from the FIA permitted the use of a second floor stay shortly before the Friday practice in Montreal. Curiously to Horner, the Silver Arrows were the only team able to field the new part.

The short time frame in which Mercedes were able to introduce a new floor for the W13 has made Horner suspicious of the eight-time Constructor Champions.

The Red Bull boss suggested the Brackley-based team would not have been able to design and install a new floor in such a quick turnaround without prior knowledge of the FIA directive.

“What was particularly disappointing was the second stay,” Horner said, according to The Telegraph.

“It has to be discussed in a technical forum, and that is overtly biased to sorting one team’s problems out – the only team who turned up here with it, even in advance of the technical directive.

Mercedes opted to race without their new floor after fears that the new floor stay could spark official protests from teams.

Several team principals expressed their concerns over the timing of the release of the FIA directive, including Alpine leader Otmar Szafnauer.

“It was quite late and we aren’t able to produce a stay here,” he said in Montreal.

“So it could very well be that we shouldn’t be running this in qualifying and the race. And if teams have brought those stays, I would imagine they could be perhaps looked at after and protested.

Aston Martin’s Mike Krack also expressed his disappointment over the announcement of the directive.

“Yes, you can react, but you need to be really sure what you are doing,” said Krack.

“You need to know upfront what this would do. So I think it’s a situation you have to take a conservative approach and then look for it for the following race.

“But as I said, the timing really could have been better.”

AlphaTauri boss Franz Tost was in agreeance with his fellow team principals.

“The timing was absolutely not good because most of the people were travelling and just to send out the technical directive a few days before the race is for sure not the best.

Mercedes have struggled a tremendous amount due to porpoising so far this season and whilst the aerodynamic phenomenon has held them back from a three-way championship title fight with Ferrari and Red Bull, this new FIA directive may prove to be a major step in the right direction for the Silver Arrows.