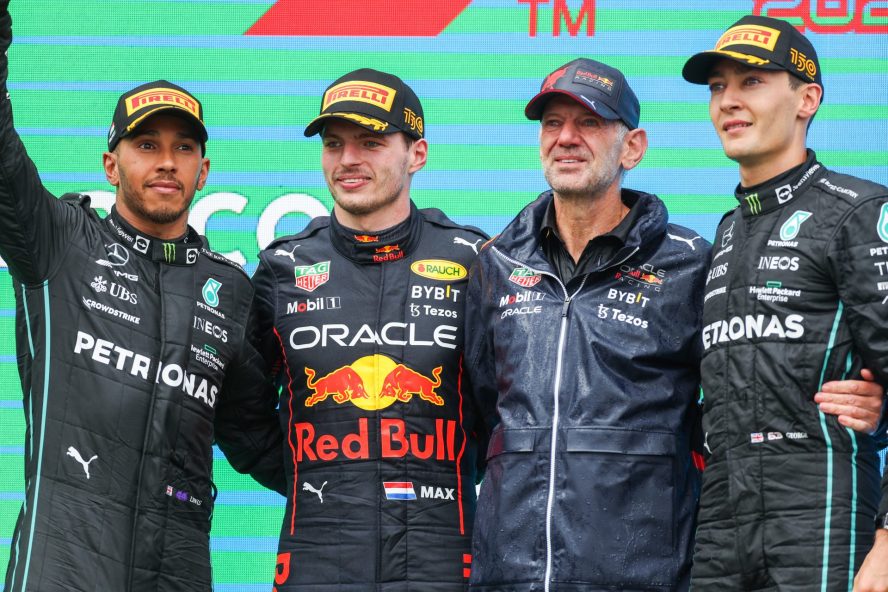 Lewis Hamilton, Max Verstappen and George Russell on the podium at the F1 Grand Prix of Hungary (Photo by Peter Fox/Getty Images)

Mercedes driver Lewis Hamilton has delivered a sly dig at reigning World Champion Max Verstappen, suggesting Red Bull’s RB18 is the reason why the Dutchman was able to complete a fantastic race, starting from tenth on the grid and finishing on top of the podium in Hungary.

Red Bull’s star boy Verstappen, worked his way into the lead in Hungary thanks to some slick and efficient overtakes and some awful race strategies from Ferrari.

Hamilton’s dominance at Mercedes has been littered with comments about his car, with critics saying the Briton’s vehicle carried him to a record amount of World Championships. Despite disputing that theory in multiple post-race interviews over the year, Hamilton has suggested that Verstappen has his car to thank for wins.

“The fact that Max started 10th and spun and still was 10 seconds ahead says enough about their car,” Hamilton said.

Mercedes’ consistency has seen the German manufacturers keep up behind championship contenders Ferrari, despite having a difficult start to the season due to a dramatic porpoising issue. Hamilton has worked his way back into the podium places over recent races, finishing third in Canada, Great Britain, Austria and second in France and Hungary.

On the hunt for more

Although the Silver Arrows have made significant improvements since the start of the season, Hamilton says the top step of the podium is the goal.

“I think this weekend, there was a potential for a win,” said the Briton.

“You saw George on pole. I think if we had both been up there, I think we probably could have worked a bit better together as a team.

“One of us would have had to support each other strategy-wise.”

Whilst the seven-time World Champion believes Red Bull are firmly ahead of the pack this season, Hamilton says they have been able to catch up to Ferrari.

“But I think if we are able to take this pace into the second half of the season for sure we can start to fight with the guys.

“This is the first time we’ve been able to fight and battle with a Ferrari. That’s huge for us.

“I think the Red Bulls probably still are ahead.

“I think we still have made huge progress and huge steps. And so to have this consistency and two double podiums in these last two races gives us great hope and a huge push for the second half.”

Statistically, Charles Leclerc’s Ferrari F1-75 has been the fastest car in recent races, even in Hungary. So if Hamilton believes Mercedes are on par with the Prancing Horses, then a dramatic second half of the season could be upon us.