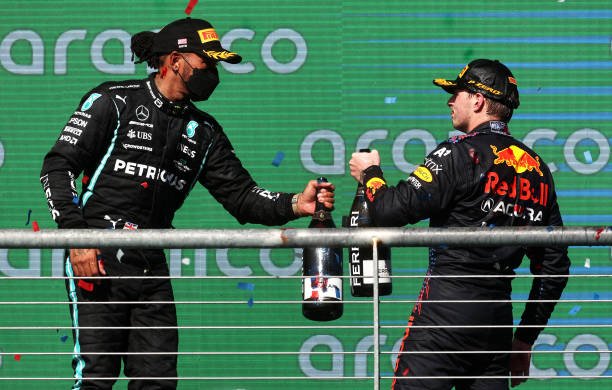 AUSTIN, TEXAS - OCTOBER 24: Race winner Max Verstappen of Netherlands and Red Bull Racing and second placed Lewis Hamilton of Great Britain and Mercedes GP celebrate on the podium during the F1 Grand Prix of USA at Circuit of The Americas on October 24, 2021 in Austin, Texas. (Photo by Chris Graythen/Getty Images)

Mercedes F1 driver Lewis Hamilton has stated that he has no problems with reigning World Champion Max Verstappen as the Silver Arrows look to rekindle the fight with Red Bull in the 2023 season.

The rivalry between the Englishman and the Dutchman peaked at the last race of the 2021 season when Verstappen controversially won his first World Championship after overtaking Hamilton on the final lap of the race.

Verstappen’s win sent Formula 1 into a frenzy, splitting fanbases split more than ever before.

Despite the fans having it out for each other, Hamilton says suggestions that he has a problem with Verstappen are nothing more than “fairytales”.

“People like to talk about there being problems between Max and me,” Hamilton said in an interview with Formula 1 Magazine.

“He is a lot younger, so maybe he has a problem with me, but I am not sure about that and I actually assume not. Although I can’t speak for him.”

Although the fans will claim Hamilton was ‘robbed’, the seven-time World Champion doesn’t blame Verstappen for giving it everything he had, stating no one can take his performance away from him.

He did everything he had to do in 2021, so why should I have a problem with him?” said Hamilton.

“He performed and delivered every weekend, nobody can take that away from him.”

Benz to bound back?

Hamilton also discussed Mercedes’ struggles last season. The Brackley-based team had their worst season in the turbo hybrid era, finishing third in the constructors’ championship behind Ferrari and Red Bull. But as they say, whatever doesn’t kill you makes you stronger. Hamilton believes that the team has become tougher and more driven thanks to their rough season.

“If I can say anything about last year, it is that as a team we have only become more resilient and more determined,” Hamilton said.

“Because we wanted to hit back after 2021. That was where our drive came from.”

Hamilton went on to say that he was not angry nor frustrated about the fact that he couldn’t fight for the title with the W13. The 38-year-old believes in himself and his abilities as a driver, saying “There has never been a driver like me.”

The Mercedes F1 team will begin the new season with a new car, the Mercedes W14, and Hamilton will be looking to add another championship to his already impressive list of achievements. With the team’s determination to come back stronger and Hamilton’s belief in himself, Red Bull will be keeping an eye over their shoulder for the upcoming season.