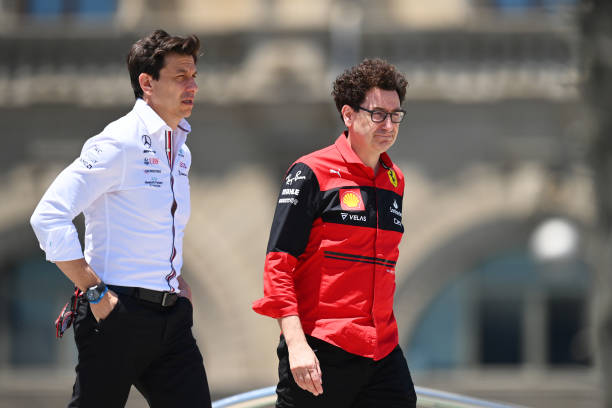 Ferrari “dropping the ball” and letting down F1 – Wolff

Ferrari and Leclerc have let Max Verstappen and Red Bull run away with the lead heading into Silverstone.

Mercedes team principal Toto Wolff believes Formula One is being let down by Scuderia Ferrari as Max Verstappen and Red Bull pull away in the Drivers and Constructors Championships.

Ferrari’s Charles Leclerc who once was a comfortable 46 points ahead of Verstappen has since conceded his lead to the Dutchman, seeing the Monagasue trail the Red Bull star by 49 points.

Red Bull’s early reliability issues have been balanced out by Ferrari’s recent mechanical issues, causing a fiery F1 title fight to peter out.

Despite the eight-time Constructors Championship winners Mercedes tremendously struggling to build a competitive car this year, Wolff believes Ferrari are the ones “dropping the ball” in the chase for the title and says it would be better for F1 if the “title fight didn’t end in September”.

“It would be good if Leclerc played up front,” said the Mercedes boss to Motorsport-Total.com.

“That would be really good for Formula 1, but they [Ferrari] are dropping the ball at the moment.

“It would be better if the World Championship goes to the end and is not already decided in September.”

Although the 49-point deficit may be a cause for panic among Tifosi, Ferrari star Leclerc says he is unbothered about the gap between him and Verstappen heading into the tenth race of the season.

“It’s a big gap, but I’m just concentrating on the work and I’m confident that we can win it back.

“That motivates me more, because of course I know that the pace is in the car.

“I’m not worried, I’m just extremely motivated to finally have a clean weekend and to show that we are strong.”

Ferrari’s engine performance has been a big worry for the Italian team which has seen Leclerc go podium-less for four races now. Two DNFs have seen the 24-year-old unable to finish, resulting in him starting from the back of the grid in Canada.

Despite the drama around Ferrari’s reliability, Leclerc believes it’s a “problem for everyone” as the Monagasue aims to reign in the 2021 World Champion.

“Reliability will definitely be a big issue,” Leclerc admitted.

“We saw that Red Bull also had a few problems. We just have to get good points consistently.”

“It seems to be a problem for everyone this season, but if we get a grip on it, the performance is there to fight back.

“If we get to the finish, then we’ll fight for victories. So we’ll try to make up a few points at Silverstone.”

Ferrari and Red Bull will be battling for important points at Silverstone as Formula 1 heads to the United Kingdom for the British Grand Prix.