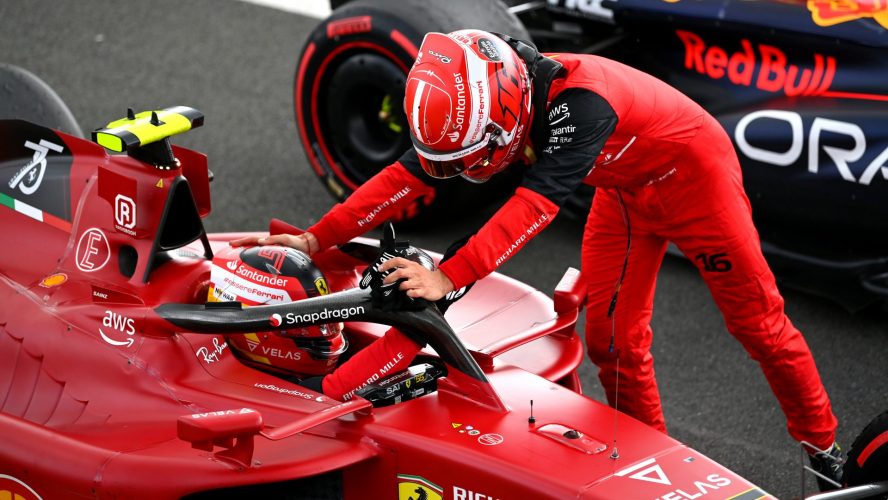 Carlos Sainz's first ever F1 victory came at the expense of Charles Leclerc.

A group of Scuderia Ferrari staff initially refused to celebrate Carlos Sainz’s first-ever career win at Silverstone as fears of a rift between the engineers in Scuderia’s garage grow.

Sainz climbed to the top step of the podium for the first time in his Formula One career at the British Grand Prix, however, it came at the expense of his teammate Charles Leclerc, who yet again was left questioning his team’s tactics.

After prohibiting their Monagasquen driver from overtaking Sainz early on in the race, Ferrari engineers twice failed to bring Leclerc into the pits under a safety car, leaving him as a sitting duck for the pack behind him on fresh soft tires.

Sainz went on to win the race while Leclerc slipped to fourth place.

Former Ferrari press officer Alberto Antonini now believes there may be alarming signs in the Scuderia garage. According to a source that Antonini trusts, the former employee believes an unpleasant scene unfolded after Sainz’s victory.

“I have been told – and I trust the source – of an unedifying episode that occurred in the immediate aftermath of the Silverstone race at the winners’ pit,” wrote Antonini on formulapassion.it.

“Part of the Ferrari staff allegedly refused, at least initially, to attend the podium ceremony and the ritual photos.”

As a former staff member, Antonini believes a bit of rivalry in the garage can be healthy for the team, however, the Italian believes refusing to attend the podium ceremony is taking it too far.

By Abby Bathurst12 hours ago

“A little healthy rivalry inside the garage is fine, it’s fine that every mechanic and every technician is rooting for ‘his’ driver, but the common interest must be to aim to win.

“The race and then, of course, the world championship.

Since the drama in Silverstone, Leclerc was captured in Monaco on Tuesday night, having dinner with Ferrari team principal Mattia Binotto.

Whilst Ferrari were able to finish the race with a driver on the podium, their tactics were severely criticised by Tifosi. Mercedes boss Toto Wolff’s claims of Ferrari “dropping the ball” appear to carry some weight as Ferrari failed to capitalise on Max Verstappen finishing seventh in Britain.

Ferrari will look to spoil Red Bull’s home race when they get their next chance to minimise the 63-points gap between them and the Championship leaders when Formula One heads to the Red Bull Ring for the Austrian Grand Prix.