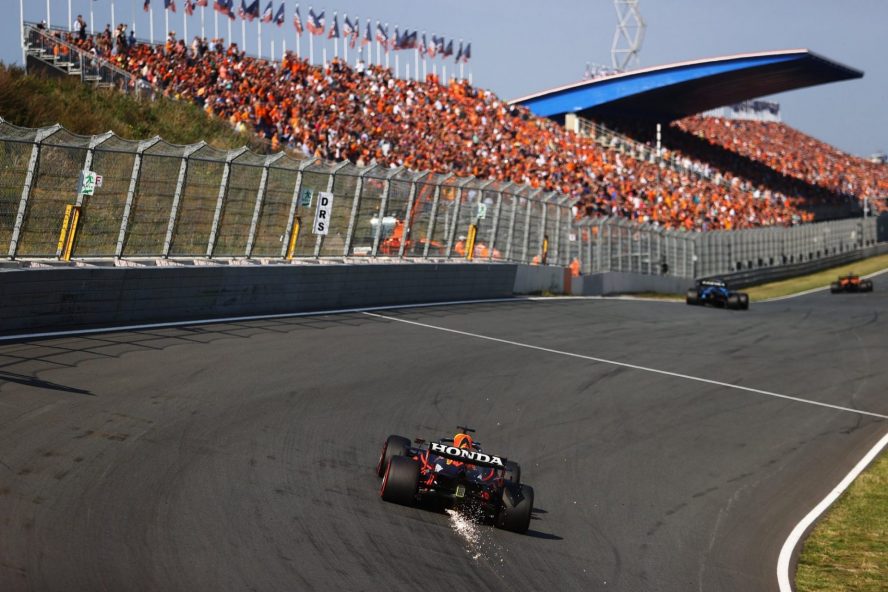 Max Verstappen going through the turn 13 banking at Zandvoort Circuit at the 2021 Dutch GP Image Credit:Formula 1

The final corner was excluded from the DRS zone last year

The FIA is looking to test extended DRS going through the final corner at the Zandvoort banking at the Dutch Grand Prix’s FP1 on Friday.

The Dutch Grand Prix at Zandvoort made a return to the F1 calendar last year after a 36-year hiatus. The track has evidently changed since its 1985 days. A major change was its 18-degree banking at Arie Luyendyk Bocht, the final corner of the track.

The track has two DRS zones. One between turns 10 and 11, and one right after the banked corner at turn 14.

In 2021 Michael Masi, former F1 race director, deemed it unsafe for DRS to be activated before the final corner. As a precautionary measure, he shortened the DRS zone until after the corner.

However, the lack of action last year urged the FIA to now re-evaluate the DRS decision they had previously made.

Having DRS through the final corner onto the main straight can boost the overtaking opportunities and allow closer racing.

The decision to extend the second DRS zone to include the banked corner on race day depends on how well FP1 goes. It also relies on how close the racing seems to get. This new DRS zone extension is only tested by the F1 series and not the support series, F2 and F3.

Considering last year’s decision by Masi was due to safety, the safety of the drivers will be the priority. The banking was renovated at the current elevation to increase potential speed, and enabling of DRS increases that further.

This is only a practice session, so seeing its full competitive potential is unlikely, but it does provide data.

“The current position is that we are going to have the DRS ahead of the final corner, so early on, to improve a bit the racing in Zandvoort,” said Nikolas Tombazis, FIA Single-Seater Technical Director, to Viaplay.

“And if we feel that there is any, even a remote, risk for the safety than clearly, we would have to take action and change it after FP1.”