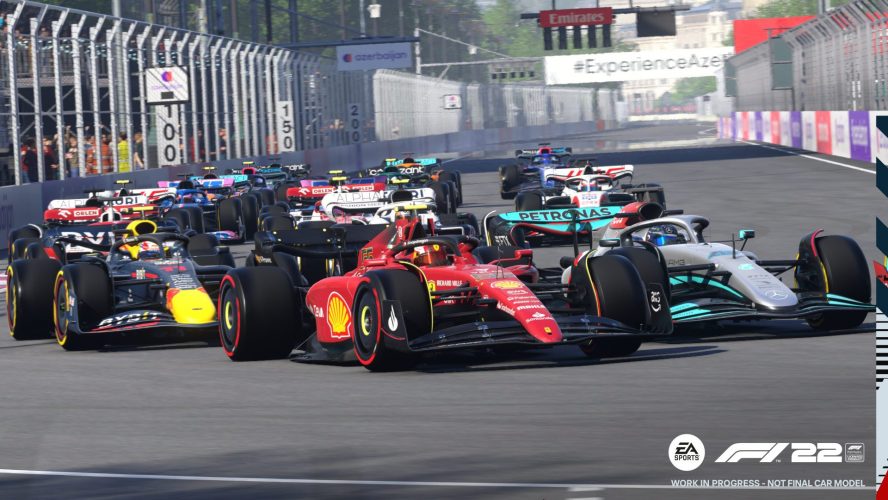 F1 22 is released tomorrow. Have EA and Codemasters delivered?

The final version of F1 22 has now arrived. As seen in our Preview Build access, the game promised to be a significant step forward above its predecessor.

EA has also added a huge playlist of different artists for the game, which you can choose to switch to theme music if the songs are not to your taste.

With Silverstone less than a week away,  testing the final version of the game mostly came courtesy of a “My Team” race at the track.

Our Preview Build review breaks down the new changes seen in My Team.  My setting is set to “contender”, and despite this, my race was far from straightforward thanks to choices I made away from the track.

The Multiplayer screen has received an upgrade, with a dedicated option for leagues, split-screen. and social play. This means gamers can choose who they play with online and are less likely to encounter those who prefer to launch you into the barrier for fun. A good security measure. Selecting tracks and voting are clearer to see as well.

F1 Life greets you upon launching the game.  The sight of my Silver Mercedes Supercar surrounded by ogling avatars is strangely satisfying. The customisation options for your avatar are as extensive as the apartment.

EA naturally dominate the clothing catalogue, but there is now a dedicated Brand Shop, containing brands like Sparco, Puma and even the option for your avatar to wear Beats headphones. All these items cost Pitcoin, the currency used in F1 games since 2020. 4,000 Pitcoin will buy you Beats headphones. That is a little pricy for a set of headphones to go on an avatar, particularly when a red Puma T-shirt costs 2,250. The Price model may need to be revisited in the next few months.

All cars are seen in the Preview Build return in the final version, including the Safety cars. The inclusion of the Safety Cars as bonus items for the Digital Champions Edition on paper should be a gimmick. Gamers have the option to play both the Mercedes and Aston Martin Safety cars in Time Trial mode.

This is a unique feature and is fun to play, but opening up the cars to other modes, such as Pirelli Hot Laps would add more depth. That said, both Safety Cars handle better than other Supercars included in the game. Players will still need to take care when braking for low-speed corners. Safety Cars are not F1 cars, and even with their better handling than the others, these will still punt you into the wall.

The formation lap in an F1 game has always been something of an oddity. Whilst a necessary part of F1, its purpose in previous games has only really been the equivalent of including it to tick a box. A game cannot replicate the urgency of tyres warm-ups, bite point checks or any other systems requiring the once over. So instead, gamers trundle around the lap randomly braking and randomly swerving to warm up their tyres. F1 22 gives this purpose thanks to the immersive formation lap setting.

You can still warm up the tyres all you want, but all your hard work can be undone when you arrive back on the pit straight. In immersive mode, you need to align your car perfectly in your grid slot using the familiar purple or red markers seen in practice programmes. This impacts the success of your getaway, particularly if manual starts are enabled.  The groans of frustration gamers are likely to experience will be very real during the first few races. However, it is satisfying to achieve both the perfect grid spot entry as well as the perfect manual start.  Expect smug faces from your friends in a multiplayer session if they ace it and you are not so lucky.

Broadcast mode is a risk-free alternative. This has your lead commentator speaking as the cars leave the grid. Using TV graphics, onboard cameras and information such as race strategy, this only last 30 seconds or so. EA and Codemasters have chosen to not force players to watch a whole formation lap, which is a sensible choice.  I opted for immersive for the full experience and parked my car perfectly in pole position. Be aware though, that if selected you cannot skip the broadcast version.

My difficulty settings were set to 5o, but despite this, Schumacher was beginning to catch me as my medium compound tyres began to wane. My handling  also began to suffer from the damage, as well as living with a badly worn MGU-H.  The new physics model makes full-distance races an immense challenge now, particularly if you have been too aggressive over kerbs multiple times.

Having not learned my lesson, I ran too wide onto the sausage kerbs, resulting in a yellow shade on my car indicator. The warning from Priestley over the radio was a bit pointless, as I knew I’d really damaged the car. this time.  The realism is seen across all modes in-game, and players will enjoy attempting to master how to take kerbs.

Collisions no matter how minor are very costly. Your side-pods are not of concern in a collision, it is the floor and underside that take the strain in F1 22. Handling becomes noticeably worse, and the condition of your car will get worse, not better. I found this out when Lance Stroll decided to cut across me as I lapped him mid-race. Both of us survived the encounter, but I had lost yet more time.

Immersive pitstops were first seen back in F1 2010. These were a good start, but a bug prevented you from getting out quickly. Pit stops have improved as Codemasters developed their franchise. F1 22 takes this to the next level, with your reaction times impacting how it will go. Like the immersive formation lap, you have a familiar and helpful purple indicator to guide you. Turn too early or too late, and you will precious milliseconds or even full seconds to your pitstop. Get it right and your pit crew will rival the sub-one-second stops performed by F1 pit crews.

Your predicted pit stop is displayed above for you to see. This led to me counting down the added time from my early turn-in, powerless to do anything but watch, As with immersive formation laps, expect smug faces and comments from friends as they blast past you in the pits or come out from the pits in front of you a few laps later.

Broadcast gives you a great view of your pit entry and stop, complete with graphics. As you leave the pits, the commentator will comment on your stop, good or bad.

Following a Safety car where I pitted for medium tyres, I thought I could nurse my car to the chequered flag. But skipping the fuel management programme came back to haunt me. I now had a badly damaged car, not enough fuel, and a teammate catching me with 13 laps left. The new physics model really came into its own here, as I struggled even on new medium compound tyres to save fuel and nurse my stricken car, eventually winning by 2.1 seconds.

F1 22 takes the strengths of F1 2021 and builds on it to create the most realistic experience for gamers to date. Alternatively, for those who want to get a feel for F1 without going all-in on the settings, the adaptive AI, assists,  different modes for My Team, and Multiplayer options for all levels provide a good entry. Beginners can then progress. The Brand Shop may come in for some criticism, but this is a minor qualm in an otherwise brilliant game.