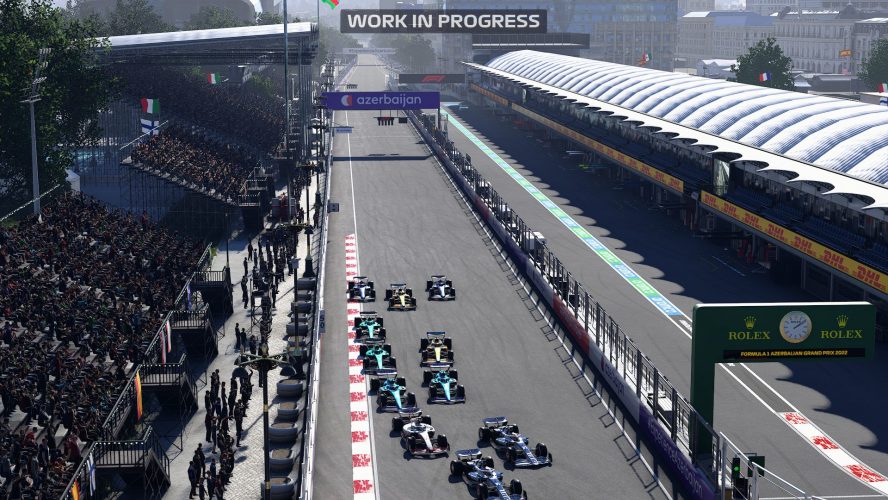 We've tested the final preview build ahead of the game release, are the changes any good?

Even in its unfinished format, F1 22 is a significant step forward from F1 2021. All of the new modes introduced have been well thought out, and add a new layer of authenticity and complexity to the game.  F2 has returned, with the full 2021 season available to play.

We’ve been very lucky to secure the final preview build of F1 22.   Unlike the first preview build, this version has access to almost the entire game, with only Multiplayer missing. This does not detract from the game experience.

EA’s first venture with Codemasters holds much promise, with social interaction key to many of the new changes. While Multiplayer has offered gamers the opportunity to share their experiences for several years, F1 22 adds a new layer to this with customisation.

F1 Life greets you when the game launches. The idea is for a central hub for you as the gamer to customise.  You have bays for the supercars you unlock through the game. In the Preview Build, unlocking the first car is quite simple, drive a set number of miles in specific categories, and you can choose a car to unlock. Gamers have an avatar that will be their in-game identity. F1 Life should feel like a gimmick, but instead, it complements the new in-game experience.

The customisation options within F1 Life are extensive.  The furniture, lighting, and even the outfits your avatar wears are customisable, with different options available. All can be unlocked via Podium Pass, or standard levelling up. A floor-to-ceiling trophy cabinet also gets its own screen. It will no doubt be immensely satisfying to watch it fill up as you dominate F1.

A unique feature of F1 Life is the ability to allow players into your space. Gamers can have friends’ avatars ogling at their supercars, and taking selfies with them. Again, this should feel like a pointless gimmick, but it instead adds more engagement. Gamers can click on the avatar and learn more information about them, or remove them, should they scratch the paintwork.

F1 Life is a feature that will only grow in further iterations of the game year on year. It is a brilliant addition to the series that will push multiplayer but in a very positive way.

F1 22 introduces three new tiers for My Team. Each is a test of your skills. The first Newcomer mode is a continuation of the current model. Challenger mode lets you have more resources.

As gamers have always started at the back of the grid. we naturally went for the Front Runner setting. This immediately puts you amongst the top three teams from a development standpoint. All bar one sponsorship slot was available to fill, and in as this version is the legendary edition, I took the opportunity to have Michael Schumacher as my teammate.  Given the livery design for the car resembled the 1994 Benetton B194, complete with a Renault engine, the German was the only logical choice.

Do not believe that starting on the Contender setting means you are immune from issues and parts failing during construction. Parts will continue to fail in batches on occasion, and your development tree is still as bare as when you start on the Newcomer setting.

The core function and gameplay of My Team has not changed – decisions are still needed that can affect the team’s performance and players can skip any challenges between races (now Supercar related). The three new settings decide on what journey your team will go on, but do not think that Contender makes it easy for you, far from it. The ability to play Supercars has been an unexpected bonus. Players can choose from models by McLaren Aston Martin, Mercedes and Ferrari. Each can be unlocked by either completing challenges in-game such as laps in an F2 car, or by completing the Pirelli Hot Lap challenges.

The Pirelli Hot Lap Challenges themselves are surprisingly addictive. Consisting of time trials, drifting, and average lap count, players do not run out of challenges in these cars.

An obvious point that needs making is that the Supercars do not handle like F1 cars. Yet you will need to remind yourself of that when you brake from 190mph for Tamburello corner in a supercar.  These cars are programmed to behave like the real thing, and controlling them takes finesse. If jumping straight from an F1 race to a supercar, gamers will need to alter their driving style.  That said, it is very satisfying when the perfect line through Tamburello is achieved in both a McLaren F1 car and a McLaren supercar.

Since the high downforce beasts of F1 2017, players have been used to throwing their cars into corners and expecting them to survive. 2022 handling is different. We are not back at the 2014 levels of grip, where accelerating even a little led to a spin, but cars can no longer take extreme punishment.

I found this to my cost at Barcelona when I took much Sausage Kerb before the back straight. The car jolted, slowed and spun into a pirouette. Similarly, take too much high kerb at Monza, and the car do will do exactly the same. The new style of the car is challenging and still just as fun to race, but  the handling is a departure from recent seasons.

Fortunately, the porpoising that has afflicted so many teams in F1 this year has not ended up in the game. This will no doubt be a relief to VR gamers, who may have suffered a little sickness if forced to experience porpoising. The new handling model has changed the cars, (almost) fully replicating the new 2022 regulations.

Since the introduction of custom liveries in 2020, most gamers now have a preferred livery. However, it can be annoying when you want to replicate the colour scheme across the rest of your car, helmet and race suit. A very neat little feature for F1 22 is the introduction of copying and pasting colours to be used later. It is a very small change when compared to the rest of the game, but it is a huge time saver.

Another neat feature is once you have unlocked a supercar in F1 life, you can simply select it and decide if you want to time trial it, drift it or any other challenge that takes your fancy.

The overriding impression of F1 22 is a game that that seeks to raise the bar to another level. This has been achieved emphatically. The addition of supercars is a feature that will get more initial playing time than the My Team or Career. To create features that showcase the game but add new areas of engagement in a non-gimmick way is impressive, and bolds well for the future.  Time to get my engine upgrades ready for Barcelona…

The Digital Champions edition of F1 22 is set for release on June 28th.