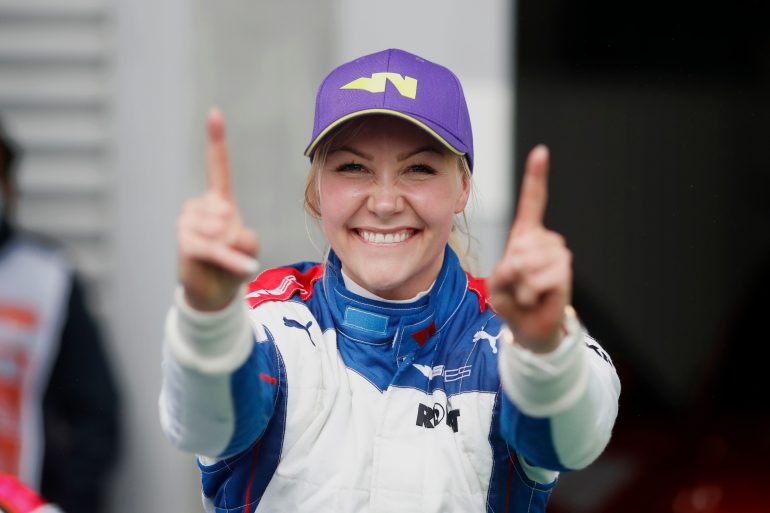 Be prepared to hear Emma Kimiläinen’s name come up often in 2022. The Finn recently filled in last-minute for Valtteri Bottas at the Race of Champions and is now getting ready for the new W Series season after placing third in the 2021 Championship. FormulaNerds caught up with Emma to discuss what to expect from the new year and her goal for 2022 is clear: winning.

Hi Emma, how are you?

“It’s rainy here but I’m doing good, thanks for asking. Waiting for the season to start!”

You just came back from the Race of Champions after a last-minute substitution, can you talk us through that?

“Well, it was very short notice, just a couple of days as Valtteri [Bottas ] couldn’t join suddenly, so then they asked if I could do that. Actually, Mika Hakkinen said that he doesn’t want to drive with anyone else but me, so then they just called me and asked me if I was available and I needed to arrange some childcare and everything like that to make it happen. Then I did and I was thinking: “I don’t even know what cars we’re driving, I have no idea what’s happening there, I have no schedule, anything, I have no clue what’s happening”. Then I was still thinking that maybe someone would say that they don’t wanna participate because they are not ready and it’s a million-dollars place to show your skills but you have no chance or time to rehearse or practice or whatever but I was thinking: “What can I lose? Basically nothing. I can only win and I guess it’s probably a great experience to be part of that kind of thing” so I was just thinking that I will take the challenge and enjoy it.

On a driving side, you called the ROC a “strange field” for you. How was the learning process?

“I’ve been driving on ice before but only on supercars, very heavy ones RWD or then 4WD but like Ferrari, Porsche, stuff like that. The only car that was Porsche that everyone else was complaining that they don’t know how to drive was the only one I could actually drive so I was like: “This is good !”. Then the rest of them, you know the rally car? I’ve never driven a rally car before and had no clue how to do it technically. We had a snowstorm and the track was flooded and then we needed to cut to 1/3 of the original. What happened then is that there came these hairpins where you really need that technical understanding of the car, how to handbrake turn for example. I had never done that and I said: “Well okay, nice to go to the actual race to do this!”. Only one lap and I went there and went: “Maybe I pull the handbrake” but then I should have pushed the clutch at the same time and have the revs up with a rallycross car. Things like this that I didn’t know before I learned during the races but when it’s only one race and then you’re out, it’s pretty brutal. But it was so much fun and I enjoyed it. The atmosphere there was amazing, people, and the whole event they have arranged it so well. It was a true pleasure, I have learned a lot and this rally bug really bit me a little bit so now I’m thinking that I really need to go and drive some rally car at some point because it was so much fun. “

Talking about your future in rally, would you consider Extreme E an option?

“Definitely, definitely! It’s a very interesting concept what they have in the project. That would be definitely something I would be interested in. My first time in a rally car and not losing so much it was pretty good that I get a bit of practicing I would be probably pretty good at it. I was thinking that maybe someday I will do some racing in top formula racing and W Series. That would be nice!”

Your teammate was Mika Hakkinen, how was it to be paired with an F1 legend?

“He’s my childhood hero. He’s obviously a very nice guy, everyone loves him for a reason because he’s such a genuine and nice guy. Also, a huge talent so it was a pleasure to represent Finland with him and to be friends with him. It’s a very good and enjoyable experience.”

Hakkinen defined you as “brilliant”, how is it to receive this kind of compliment from your childhood hero?

“It’s obviously nice because you’ve worked so hard for so many years since you were a kid and you have Mika Hakkinen coming and saying: “I will only share the car with Emma”. It’s very lovely to be recognized at that level. It’s good, it feels great! I really look up to him and his achievements so it’s a dream come true. “

Switching to W Series, can you talk us through the last season and what you think would be better this season?

“Last season the first race was a pity that I finished 14th or so because of the accident that I had with Beitske Visser and that’s why I didn’t get any points. It really affected the Championship’s title for me. This year I really hope that I will get clean races and try to get the points wherever I can and be sensible in that way. I think that’s the only chance to win the Championship. Of course, take as many wins as I can but still, to be consistent that‘s probably the key because we only have 8 races. That’s my aim to win the Championship this year and hopefully, that will happen.”

“It came clear last year in the middle of the season what I need and what I want from the car and the people that I work with and from everyone. I think that being in mind now clearly will help to be on the top from the beginning. Last year it was a bit tricky in the beginning as I hadn’t done any racing in one year as 2020 was canceled completely. Yes, we had the same cars as in 2019 but still, the staff, the engineers, and everyone was new. Suddenly coming there with very little practice or at all, it was tough for everyone I guess but now it’s a bit different because we have the memory from October. It’s good to start now.”

How is your training going? How are you preparing for the season?

“Like an athlete training every day physically. I’ve also been doing a lot of snowmobiling, which is awesome, training for the driving because it’s physically very tough. It’s like dirt bike, motocross racing. It’s also the eye contact, the feeling, and how you’ve sensed the trails and the vehicle you’re driving in. it’s very similar and I’ve done that a lot. It’s my way to train!”

Would you declare winning the W Series 2022 Championship is your goal for the season?

Knowing it’s not yet sure Jamie Chadwick and Alice Powell will return, does that put any added pressure on you?

“It’s amazing that we have new teams joining in and the more is invested in female sport and motorsport is always heart-warming for us drivers. I welcome all the teams that are coming to W Series and I hope that many others will follow as well. It’s amazing news that there is interest around W Series and that really helps W Series grow, which is what we need to be an even better Championship for the coming years. “

The calendar for 2022 has recently been announced. Are there any tracks you are particularly happy about or some you will miss?

“I think the calendar is amazing. Being able to go to the US twice and Miami will be awesome. Then going to Asia for the first time as well it’s gonna be really cool. Hopefully, we can this year do Mexica that I’ve really waited for last year as well. It’s awesome. The only pity is that we don’t have Spa in there. It’s such a legendary track, the atmosphere, the people, and the track itself. That’s the only thing that I was missing from the actual calendar but otherwise, I think it’s amazing and it’s going to be a great season.”

Finally, what should we expect from W Series this year?

“We should expect hard racing, growth, amazing atmosphere, and feeling. I think sport is the greatest when it brings up emotions and W Series is definitely up to do that. I hope that people will enjoy watching our hard racing and we can give the audience a very good show.”