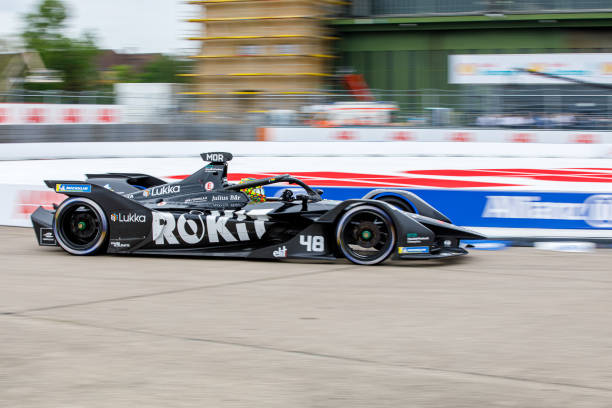 Yesterday’s pole-sitter and race winner Edoardo Mortara takes pole with Envision’s Nick Cassidy lining up beside him on the front row.

With the track now running in the opposite direction to Round 7 yesterday, the cars headed out for qualifying.

Championship leader Stoffel Vandoorne lead the pack setting a 1:07.115 in the final few minutes. This pushed Envisions Robin Frijns into P2 after setting a 1:07.327. RoKit Venturi driver Lucas Di Grassi set the third fastest time with a 1:06.900. Nick Cassidy clinched the last of the duel spots with a 1:07.370 placing both Envision cars in the duels. The field showed lots of pace with all 11 drivers within a second of each other. This only got closer as there was less than a tenth between P2 and P10.

Eliminated in Group A:

Yesterday’s race winner Eduardo Mortara set the fastest time of Group B with a 1:06.753. Following him last year Champion Nyck de Vries set a 1:07.080. Claiming P3 DS Tcheetah’s Antonio Felix Da Costa places P3 with a 1:07.175. Porsche’s Andre Lotterer takes the final duel spot with a 1:07.217. Lotterer remains the only driver on the grid to make it through to every duel so far this season.

Eliminated in Group B:

Lotterer and Vandoorne were the first up to the duels. After a lock-up in sector one Vandoorne sets a 1:06.806. This however sees him eliminated as Lotterer sets a 1:06.504 pushing him through to the semi-finals.

Moving onto the second duel ex-teammates Frijns and Da Costa go head to head. Da Costa was first to hit the track setting an almost perfect lap with a 1:06.184. Frijns however managed to set a 1:06.170 putting him through to the semi-finals. Both drivers separated by only 0.014 seconds.

The next pair to face off was De Vries and Di Grassi. De Vries found a comfortable lead setting a 1:06.238. Di Grassi put in a 1:06.508 however this saw him eliminated.

The final duel of the quarter-finals saw Mortara and Cassidy face each other. Yesterday’s pole-sitter Mortara still on a streak setting a 1:06.110 putting him through to the semi-finals. Cassidy narrowly missed out after setting a 1:06.377

Progressing to the first semi-final Lotterer and Frijns face off against each other. Frijns takes the upper hand of the duel claiming his spot in the final with a 1:06.552. Lotterer set a 1:06.671 however this saw him eliminated.

The second semi-final sees De Vries and Mortara go head-to-head. Yesterday’s polesitter and race winner yet again takes a comfortable lead setting a 1:05.897. De Vries sets a 1:06.285 however this wasn’t enough to take him to the finals.

With Mortara and Frijns both looking for their second pole it was set to be a close battle. Frijns was the first on-track setting a 1:06.470. This however could only get him P2 as Mortara set a 1:05.972 claiming him 3 points and pole position for today’s race.