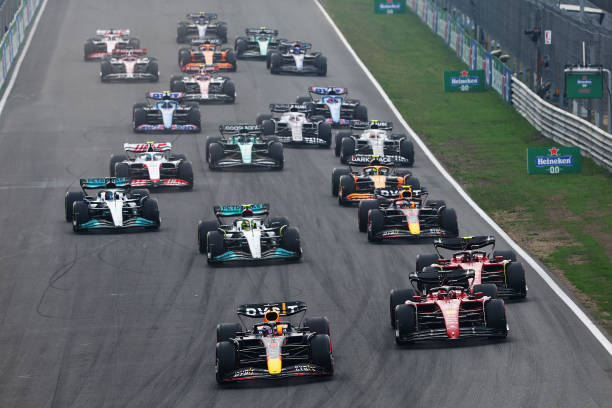 Find out who won the Dutch Grand Prix

The reigning world champion would start the race from pole position, having narrowly edged Charles Leclerc by 0.021 seconds in yesterday’s qualifying session.

As the five lights went out, Verstappen got a clean getaway and led into Turn One. The Ferrari duo of Charles Leclerc and Carlos Sainz held second and third.

Hamilton made contact with Sainz as the Briton tried to go down the inside of the Spaniard going into Turn One.

All of the drivers were well behaved on lap one. However, on lap two Magnussen lost the rear of his Haas. The Dane found himself in the gravel at Turn Two and clipped the barrier.

Verstappen was able to break the DRS from Leclerc on lap three. The reigning world champion set the fastest lap of the race with a 1:16.249 at the end of lap two.

Since Verstappen broke DRS on lap 3, the Dutchman had been gradually increasing the gap between himself and Leclerc. He increased the gap to 1.9 seconds on lap nine. Meanwhile, Sebastian Vettel was the first driver to pit on lap nine. The German switched from the soft tyre to the medium tyre.

Vettel’s pitstop made Daniel Ricciardo and Pierre Gasly respond by pitting on the next lap. The pair pitted onto the mediums with Gasly staying ahead, but Vettel was able to undercut Ricciardo.

Whilst all of the action has been happening, Hamilton had constantly been within a second of Sainz until the Spaniard decided to pit on lap 14.

Disaster in the pits for Sainz

After being put under constant pressure from Hamilton, Sainz decided to pit on lap 14. However, the Spaniard had a horrible stop as he was stationary for 12.7 seconds. To make it even worse, Sergio Perez went over a Ferrari wheel gun.

It would be four laps later when Sainz’s teammate Leclerc would pit. Unlike the Spaniard, the Monegasque had a good stop with a 2.5 second stop. The reason for the 28-year-old’s slow stop was because of the team not having his rear left tyre ready.

Zhou Guanyu also did not have a good time in the pits, as the Chinese driver received a five-second time penalty for speeding in the pitlane.

Although Verstappen said his soft tyres were still good. The Dutchman responded by pitting a lap later on lap 19. Despite a slightly slow stop, Verstappen found himself five seconds ahead of Leclerc.

The Dutchman showed his pace, setting a fastest lap of the race on lap 20 with a 1:15.904. The reigning world champion eventually passed Russell into turn one on lap 28. The Dutchman went round the outside of the Briton, who is yet to make a stop, to go up into second.

Hamilton pits from the lead

Hamilton took the lead of the race when the Dutchman pit on lap 14. The Briton finally made his first pit stop of the race on lap 29, going from medium to hard tyres. The seven-time world champion came out of the pits into fifth place.

Despite Hamilton stopping for the hard tyres, Verstappen still thinks that the hard tyre will not be a good race tyre. However, Hamilton’s teammate Russell pits for hard tyres two laps later, coming out of the pitlane in fifth behind his more experienced teammate by seven seconds.

With Hamilton having great pace, the Briton found himself right at the back of Perez on lap 36. Hamilton tried to make a move around the outside of the Mexican into turn one. However, Hamilton was forced wide into turn one as the Mexican locked up.

Hamilton got the job done a lap later, passing Perez into turn one with ease. However, the Briton had to work for it as he encountered Sebastian Vettel exiting the pitlane, holding him up and almost costing him the place to Perez.

After passing Perez, Hamilton set the fastest lap once again with a 1:15.116, before his teammate Russell overtook Perez into turn one on lap 39.

After seeing Mercedes’ pace on the hard tyre, Red Bull decided to pit Perez on lap 40 for the hard tyre as the Mexican was struggling on the medium tyre.

Perez showed his pace on the hard tyre, setting the fastest lap of the race with a 1:14.930. The Mexican passed Lando Norris on lap 44 as Carlos Sainz pits for a second time, pitting for hard tyres.

Yuki Tsunoda thought his tyres were not fit properly when leaving the pitlane on lap 44. However, his team said that the tyres were fit on properly.

The Japanese driver stopped on track and then got going again to go into the pits again. AlphaTauri believed it was a seatbelt issue. However, the 22-year-old stopped on track on lap 47, causing a virtual safety car to be deployed.

Verstappen took advantage of this as the Dutchman pit for hard tyres, responding to Hamilton. The VSC ended on lap 50 with the Briton behind the Dutchman by 12.5 seconds at the restart.

Disaster struck for Valtteri Bottas as the Finn stopped on track at turn one on lap 55.  This triggered a safety car with many drivers capitalising on pit stops.

Verstappen made another pit stop, pitting for soft tyres, filtering out in third behind the two Mercedes cars. Charles Leclerc also stopped again to put on soft tyres, but the Mercedes drivers did not.

However, Russell decided to pit for soft tyres, dropping him into third place. All cars were lined up as the safety car would come in at the end of lap 60.

Hamilton led the way but lost out straight away to Max Verstappen going into turn one as the Dutchman had fresher tyres. The Briton was raging at his team for not pitting him onto the soft tyre.

Verstappen then pulled away as he set the fastest lap with a 1:13.682. Russell then passes Hamilton on lap 64 going into turn one.

It got even worse for the seven-time world champion as Leclerc got passed him on lap 66, utilising the fresher tyres. However, it was not good for Leclerc’s teammate Sainz as he received a five-second time penalty for an unsafe release on Fernando Alonso.

Verstappen took the chequered flag comfortably in first as the Dutchman finished four seconds ahead of Russell in second.