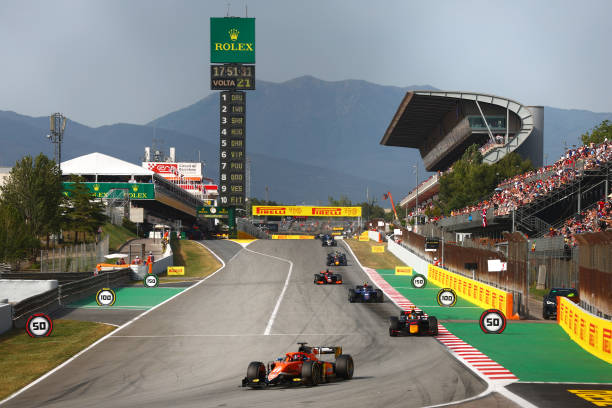 BARCELONA, SPAIN - MAY 21: Felipe Drugovich of Brazil and MP Motorsport (11) leads Ayumu Iwasa of Japan and DAMS (17) during the Round 4:Barcelona Sprint Race of the Formula 2 Championship at Circuit de Barcelona-Catalunya on May 21, 2022 in Barcelona, Spain. (Photo by Alex Pantling - Formula 1/Formula Motorsport Limited via Getty Images)

The sprint race got off to a nightmarish start for polesitter Calan Williams as he stalled on the grid. The rest of the competitors embarked on their formation lap whilst the Trident driver was pushed into the pits.

With the pole position slot left empty, second-place Jake Hughes hoped to establish an early lead. He quickly dropped back to fifth place, bringing an end to his dreams of victory.

Contrasting fortunes were prevalent over the first few laps. Pourchaire continued to fall down the order, finding himself in seventh by the end of lap two.

After a spin by Nissany at the back of the pack, attention turned to the leaders. Less than a second separated frontrunner Drugovich from rookie Ayumu Iwasa, who was racing for his first podium.

American driver Logan Sargeant appeared on the radio claiming that he was faster. However, an attempt to pass Iwasa at turn one was unsuccessful.

Driving for Hitech GP, Juri Vips spun out at turn four, finding himself in the gravel.

The error follows a promising weekend for the Estonian racer, who made his Formula 1 debut in FP1 on Friday.

Sitting eighth in the standings, this round was a chance for Vips to further his championship fight.

The safety car emerged, bringing the pack closer together. Despite hopes of a dramatic restart, the order remained exactly the same.

With few overtakes over the next few laps, Amaury Cordeel took a 10-second stop-go penalty for being out of position on the starting grid.

The closest battle on track was between Jack Doohan, who will start from pole on Sunday, and Mercedes junior driver Frederik Vesti.

Halfway through: DRS is enabled

The most exciting fights were at the back of the pack, where we saw two overtakes in succession.

Olli Caldwell passed Bolukbasi for 15th position, just before Marino Sato got ahead of Nissany for 18th.

The battle between the Williams F1 test driver and Sato continued over the next lap, with Nissany eventually coming out on top.

Little action was happening at the front of the pack. Drugovich built up a nice lead as Iwasa stayed around two seconds behind him.

Further down the track, Daruvala passed Hughes for fourth, matching his qualifying result on Friday.

Just as it looked like the race order was pretty much decided, Pourchaire overtook Hughes. Finishing in fifth will minimise the damage done to his championship fight, although Drugovich received an extra point for achieving the fastest lap.

Despite effectively starting from pole position, Hughes had a dreadful final few laps. He fell down the order to seventh before Vesti passed him.

A multitude of drivers fought for the final point, with Enzo Fittipaldi emerging on top. Behind him, Hughes once again dropped back, eventually retiring from the race.

Felipe Drugovich achieved the maximum 11 points in today’s sprint race as rival Pourchaire could only manage to take four points.