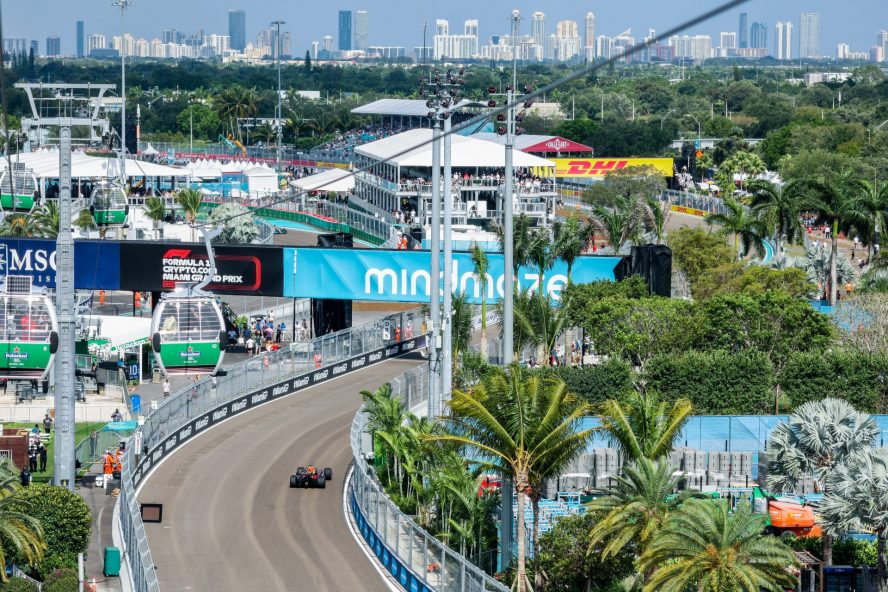 F1 drivers have taken to the media to voice their concerns about the track surface in Miami.  The purpose-built track has seen a lack of grip become a real problem for the drivers across Practice and Qualifying. Carlos Sainz and Esteban Ocon have both crashed out at the same corner in two different sessions.

The concerns centre on if a car moves off the racing line.  The experience has been likened to gravel, with drivers fearing overtaking will be difficult. Some are concerned they will make blameless errors.

Alpine’s Fernando Alonso was pragmatic but said the situation had to improve next year.

“There’s gravel off-line, it’s going to be difficult. There’s nothing we can do. This weekend we need to put on the show, but this has to change for next year.

Lance Stroll has said  “wouldn’t go off-line” when overtaking. Yuki Tsunoda said, “one millimetre you feel the difference of the grip and as soon as you drive on that, you lost the rear”.

Drivers first raised the issue on Friday. Despite three practice sessions, qualifying, and the W series race, the grip is still a problem.

Further concerns are likely to be raised if predicted overnight rain washes away the already limited grip.

McLaren’s Daniel Ricciardo confirmed that there was only one line for the drivers to take when on track at present:

“I’m totally OK with not having the same thing all 23 places we go,” “I’m OK to have points of difference to make some circuits unique and have their own character.

“But in saying that, this isn’t a nice surface to drive on. It’s not that it’s just like, ‘oh, it’s challenging’, but it’s just you literally have to just stay on that one line otherwise you’re not really on the track anymore.

“So instead of making it a good challenge, it just makes it a little bit one dimensional because you only have that one option of that one line where there is a little bit of rubber building up.”

Teammate Lando Norris has praised the event and build-up,  and said the track is currently “not good enough”. Confirming Miami’s surface is an isolated issue, Norris referenced Jeddah as an example of a high grip street circuit:

“When there’s so much expectation, and you want us to provide good racing and entertainment and everything, and then there’s a surface which they’re trying and they just kind of wing it in a way to see what it’s going to be like, it’s not good enough,” said Norris.

“Because then we can’t do what they require, we can’t put on a good show. We can’t race.

“It’s not our fault. But it’s a shame. I think if it was a surface like we have in in Saudi, for instance, it’s just very high grip in general. It survives in hot temperatures.

“Then I think everyone will be looking forward to an extremely exciting Sunday. Because you can go wide, you can do different lines, you can do everything.

“Whereas everyone’s pretty much stuck to just following line astern and it’s always a lot more difficult to race that way.”

However, it was Red Bull’s Sergio Perez who provided the bluntest assessment of the circuit. When asked by Motorsport.com, he said:

“The surface is a joke.

“The racing is going to be difficult and you’re going to have the drivers making mistakes because we’ve been put into this situation.”

Polesitter Charles Leclerc has called for urgent cleaning of the track ahead of the race. The Monegasque said drivers without action, drivers are likely to make blameless mistakes:

“All drivers complained about the lack of grip that there is off-line, so if you’re going to make a pass, you need to make it stick fairly early into the braking,” Leclerc said.

“If not, I struggle to see us doing any late moves or lunges from far behind, because there’s very little grip.

“Even at the start it could be very tricky on that inside line and that outside line of Turn 1.

“We’ve asked the FIA to make sure that the track is as clean as possible for that start because we could see mistakes coming from drivers that really have no blame from it.

“It’s basically like driving on a dry line and out of the line is feels like it’s wet – so we need a bit of help there from the race direction.”