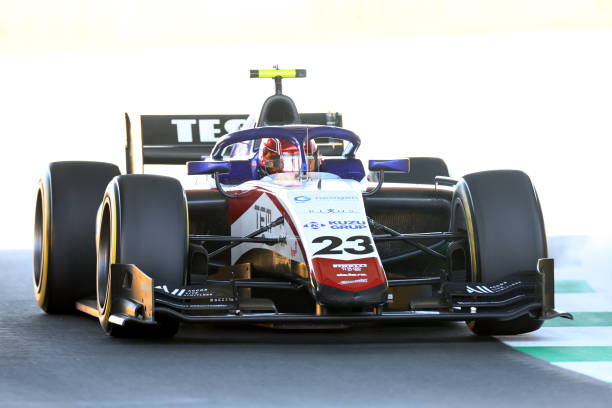 JEDDAH, SAUDI ARABIA - MARCH 25: Cem Bolukbasi of Turkey and Charouz Racing System (23) drives on track during practice for Round 2:Jeddah of the Formula 2 Championship at Jeddah Corniche Circuit on March 25, 2022 in Jeddah, Saudi Arabia. (Photo by Lars Baron/Getty Images)

In the lead up to Imola, there have been driver changes in both Formula 2 and Formula 3.

The late switch up sees Federico Malvestiti join the Formula 3 grid. As well as this, Cem Bolukbasi will not compete in Round 3 of F2, due to injury.

It has been announced that Charouz driver Cem Bolukbasi will not compete at Imola for Round 3.

Taking to Twitter to make the announcement Bolukbasi stated that “after the pain in my back we learned that I had a fracture in my rib”. Going on to say that he “won’t be able to race in Imola this weekend as my treatment continues.”

Looking forward to the future Bolukbasi said: “I will fully recover and continue the Barcelona races from where we left off”

The announcement comes after the Charouz driver crashed during Day 1 of Barcelona Testing. As a result, he was unable to take part in the final two days of testing.

The Formula 3 news came in the form of a new driver. Federico Malvestiti will join Jenzer Motorsport for the remainder of the season. The Italian returns to Formula 3 after taking a year out to pursue GT cars.

Malvestiti says he’s “very happy to be back in the team in such a prestigious championship”. He also gave “Thanks to the team for giving me this great opportunity that I never expected for this season”. When looking to the future he commented, saying: “I will do my best to work well with the team and achieve the best possible result”.

IT’S OFFICIAL! 🚨📣 Federico Malvestiti is staying with the team for the rest of the FIA F3 2022 season 🔥

We look forward to working with the Italian driver again 🤝 Welcome back, @Malve27 👊🏻#F3 #RoadToF1 pic.twitter.com/bEgpCs7QXr

Owner of Jenzer Motorsport, Andreas Jenzer commented that “It is very motivating for all of us that he is back with his ‘old team’!” adding that “it was not originally planned like this”. Jenzer addressed the team’s ambitions stating that “we now look forward and will work hard to make the best out of this second chance together”.

Malvestiti is no stranger to Formula 3 completing his rookie season in 2020 after two appearances in 2019. He has also been present at both the Jerez and Barcelona tests which took place earlier this month. Malvestiti will take the place of Niko Kari who competed during the first round in Sakhir. Kari placed 26th in the Sprint Race and 14th in the Feature Race.

Both Formula 2 and Formula 3 return to Imola for rounds 3 and 2 respectively.