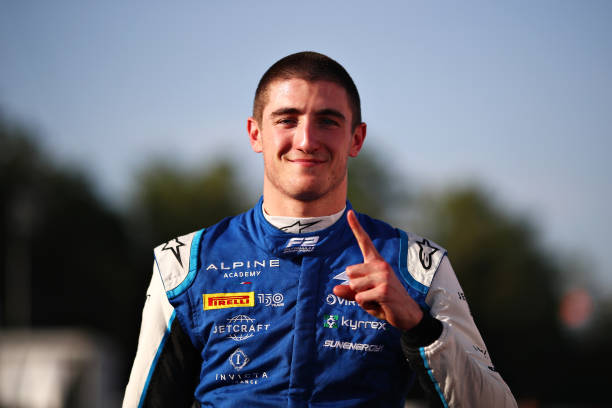 BARCELONA, SPAIN - MAY 20: Pole position qualifier Jack Doohan of Australia and Virtuosi Racing (3) celebrates in parc ferme during qualifying ahead of Round 4:Barcelona of the Formula 2 Championship at Circuit de Barcelona-Catalunya on May 20, 2022 in Barcelona, Spain. (Photo by Joe Portlock - Formula 1/Formula Motorsport Limited via Getty Images)

The Alpine junior has high hopes after his first F2 podium in Barcelona.

Ahead of the Spanish Grand Prix, Alpine junior Jack Doohan got his first taste of Formula 1 machinery at a test. Later that weekend, he scored his first podium in Formula 2. Now, he’s looking ahead to the future at his hopes for the rest of the season.

The Virtuosi Racing driver has stated he’s targeting the Formula 2 title in his rookie year, despite being tenth in the standings after four rounds. After that, he’s hoping to do something his fellow Alpine junior Oscar Piastri couldn’t manage after he won the title as a rookie: get a seat in Formula 1.

It’s a bit of a surprise that it’s taken Doohan four rounds to get on the podium, even as a rookie. He’s been easily one of the fastest drivers this season, never qualifying outside the top three. But stroke after stroke of bad luck, including disqualification from qualifying at Jeddah, saw Doohan only score six points in the first three rounds.

But Doohan took his second pole of the season in Barcelona. While he couldn’t hold off a charging Felipe Drugovich in the Feature Race, he managed to take second place and score his first Formula 2 podium.

Doohan was optimistic when he spoke to FormulaNerds after the Feature Race, citing this performance as the beginning of his fight for the championship.

“Hopefully this is the start to my bid for the title,” he said. “You know that’s how we have to be thinking. I’m definitely not looking for another season in Formula 2.”

Currently, Doohan is tenth in the championship standings, 56 points behind Drugovich. Even with ten rounds still to go, many drivers in Doohan’s position would think their title hopes were gone. But he has faith in his ability, as well as his team, that they can come back and mount a challenge still this season.

I have a really good team underneath me, and I’ve got so much knowledge, and we’re working well. I’m really happy to put some points on the board for them too, because they haven’t deserved to be where they have been this year. So I’m thankful that we were able to do so and hopefully we can continue as I look forward to challenging Felipe for the title.”

The Formula 2 title isn’t the only big achievement Doohan has his eyes on. The Alpine Academy driver is hoping for a chance at a Formula 1 seat in 2023. He has, however, acknowledged the difficulty this will be. Having watched Piastri do everything right in Formula 2 and still miss out on a seat at the top step of Motorsport, Doohan knows that a lot has to fall into place for his dream to come true.

“You perform and the rest take care of it, so obviously that’s been the goal,” commented Doohan in the press conference on Sunday. “Obviously I haven’t been performing in the races up until today, still P2. So you need to win, and then also winning isn’t enough as Oscar [Piastri] found, so things need to go our way. But this is a good start and the goal isn’t to do two years but if it comes to that, then so be it.”

Now Doohan has a Formula 1 test under his belt. He will be looking for more opportunities with Alpine to prove to them that he’s the right fit for a seat at their team. Fortunately, there are plenty of Formula 2 races left in the season for him to do just that.

Doohan wrapped his thoughts up by saying “For now I’m focusing on performing here and now, and hopefully we can be in a good spot at the end of the year to contend for the top spot.”