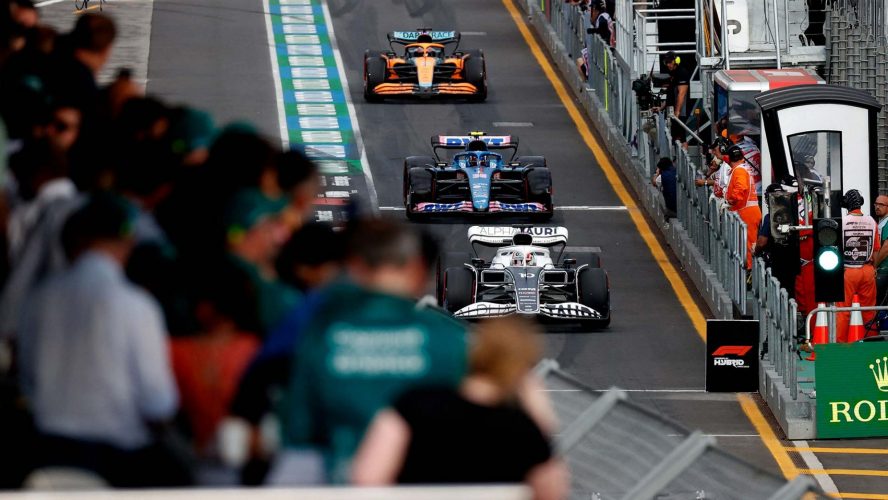 Qualifying in Australia was full of action

The drivers took to the track earlier for qualifying. The session saw lots of drama, leading to an unfortunate fallout for some.

His teammate Carlos Sainz was not so lucky as he qualified ninth. Red Bull narrowly missed out on pole with Max Verstappen in P2 and Sergio Perez behind Leclerc on the racing line in P3.

McLaren looked to have solved some of their issues. Lando Norris went fastest in FP3 and qualified in P4, ahead of both Mercedes. Returning to his homeland for the first race in three years, Daniel Ricciardo was eager to be excited to race on the newly-altered circuit. He achieved P7, creating a McLaren-Mercedes sandwich, getting into Q3 for the first time this season.

Whilst the race for pole position was on for those at the front of the pack, there were a few teams whose qualifying did not go their way. These were: Williams, Aston Martin, and Alpine.

Red Bull’s Perez was also under investigation after qualifying. He had “allegedly [failed] to respect single yellow flags”. However, “no further action” was required as the Stewards “conclude that PER acted appropriately to the situation.”

During FP3, both Aston Martin drivers crashed their AMR22. Sebastian Vettel crashed near the beginning of the session, while his teammate Lance Stroll crashed towards the end.

It was uncertain as to whether both cars would be fixed in time for qualifying. Vettel did not start Q1 with the rest of the grid because his car was still being fixed.

However, Stroll’s car was mended enough that he was able to get on track. But his qualifying session came to a premature end after he had a crash with Nicholas Latifi.

Due to the red flag brought out by this crash, Vettel was able to do one quick lap around the circuit with only a couple of minutes left of Q1. Unfortunately, he could not get out of the bottom five and qualified P18.

The Stroll and Latifi Crash:

Nicholas Latifi has not had very much luck during the opening rounds of the season. In Saudi Arabia we saw him crash twice over the course of the race weekend. During qualifying, the Canadian crashed but managed to put in a lap; in the Grand Prix, however, his crash caused him to DNF the race.

This morning in Melbourne, with two minutes remaining, Latifi allowed his fellow Canadian, Stroll, past. The latter then slowed down, to which Latifi attempted to get back around Stroll at Turn 5.

However, this manoeuvre was not successful as Latifi’s left-rear wheel made contact with Stroll’s right-front wheel. The two were then out of qualifying, with Latifi in P19 and Stroll not having a classified time.

Over the radio, Latifi could be heard saying “I don’t understand what he was doing, he wasn’t looking in his mirrors”.

Stroll shared Latifi’s sentiment but directed to the latter saying: “Unbelievable, man, I don’t ******* understand what he was doing.”

The crash was referred to the Stewards, who received a report from the Race Director. Both drivers were summoned and along with a team representative, shared their view.

The outcome of the Steward’s investigation has been released in the FIA document. It states that:

“The Stewards find that STR was predominantly to blame for the collision because of his lack of situational awareness of LAT’s passing manoeuvre.”

As a result, Stroll has been given a three-place grid penalty as well as two penalty points. This fallout is not what Aston Martin would have wanted, especially after Vettel’s fine from yesterday.

After qualifying, both drivers shared their thoughts. Stroll said that “it was a messy day” but the team will “regroup and come back” on Sunday to “take any opportunities”.

Latifi said that it is “extremely frustrating” because the “goal” was to have “a clean weekend”. He added that whilst the impact was “very small”, the “way of [it]” has “big consequences”. But the Williams driver stated:

“I’ve seen the video so it’s very clear from my side who is at fault.”

Alex Albon, who joined Williams for this season, has an unfortunate fallout as well. Albon qualified in 16th during today’s session.

Carried over from Saudi Arabia, Albon already had a three-place grid drop. This was because he crashed with Stroll during the Grand Prix – both Williams’ have crashed with the Aston Martin driver within two race weekends.

This penalty would place Albon P19 on the grid. However, after today’s session that is not correct.

He was eliminated from Q1 and stopped on track. When the team were required to provide the necessary 1.0-litre fuel sample to the FIA, they were unable to.

This meant that they had not followed the rules set out in Article 6.5.2 of the Technical Regulations. Consequently, Albon has been disqualified from qualifying.

In the FIA document, it states that only “0.33 litre sample” could be taken from the car. Whilst he has been disqualified, Albon will be able to start the race tomorrow.

The Thai driver has said that he “felt like [the team] deserved a bit more today, but it’s all to play for tomorrow.”

Fernando Alonso crashed during Q3 after a great weekend, showing the Alpine’s pace. The Spaniard crashed at Turn 11 as his Alpine spun, bringing out the second red flag of the session.

He suffered issues during Saudi Arabia, and it is suspected that a problem with the hydraulics caused his Alpine to go through the gravel today.

So after all the chaos of qualifying, Leclerc is on pole. Latifi qualified in 19th and will need his Williams repaired before the race tomorrow. Stroll did not set a time and receives a three-place grid penalty ahead of the Grand Prix and two penalty points. Albon already had a three-place grid drop, but has been disqualified. Alonso’s Alpine also needs repairing ahead of the race, where he will start in P10.

The starting grid for the Australian Grand Prix after the fallout is as follows: