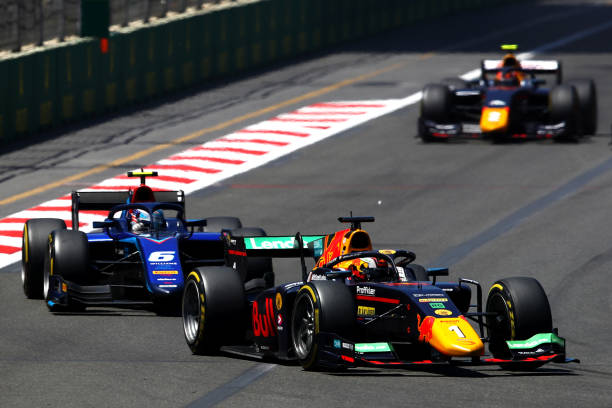 After a collision between Calan Williams and Cem Bolukbasi in yesterday’s Sprint Race, Ralph Boschung received a 3-place grid penalty for causing the collision. The Campos driver dropped from 18th to 21st.

As the lights go out Juri Vips maintains his lead with Liam Lawson behind and Dennis Hauger in P3. Hauger is however quickly passed by Marcus Armstrong.

Sprint Race winner Frederik Vesti stalled on the grid, however, after being pushed to the pitlane he manages to join the rest of the grid.

Further behind in the field Olli Caldwell and Amaury Cordeel collide going into Turn One bringing out the safety car.

Lap Four sees the safety car come in, Vips controlling the restart well as the front three remain as it was.

At the back of the field, Vesti started to push his way back through the pack, passing Clement Novalak on Lap Six.

Jehan Daruvala starts off the pit stop train. Out on track Vips pulls away as Armstrong and Lawson battle for P2.

Moving onto lap nine both Lawson and Hauger come into the pits, Hauger getting ahead after Lawson suffered a slow stop.

Armstrong follows into the pits a lap later coming out in front of teammate Vips. However, on Lap 12 Vips retakes the net race lead.

Further behind the field, however, Cem Bolukbasi and Roy Nissany make contact putting them both into the wall and bringing out the safety car once again.

During this time Novalak also retired in the pits after suffering an issue for most of the race.

The safety car comes in at the end of Lap 14. Williams controlled the restart however Pourchaire and Iwasa collect front wing damage. At the front of the field, Armstrong collects damage after colliding with the back of teammate Vips at Turn One.

Lawson also picks up a puncture after a collision with Jack Doohan on the restart.

The chaotic restart sees the Virtual Safety Car brought out to collect the debris as the restart is noted by the stewards.

Racing resumes on lap 17 as the debris is cleared from the track. Williams on the alternate strategy takes to the escape road allowing Vips to take the race lead once again.

Doohan receives a 5 second time penalty for his collision with Lawson.

At the back of the field Pourchaire breezes past Armstrong to take P13.

In the final few minutes race leader, Juri Vips brought out the safety car after clipping the wall at turn eight giving Hauger the race lead.

After the late mistake by Vips, only one lap remained as the clock counted down. This was however easily managed by Hauger to take the win.

The dramatic session saw only 15 of the 22-car grid finish today’s Feature Race.

Formula 2 returns for Round Seven at Silverstone (1st-3rd July)