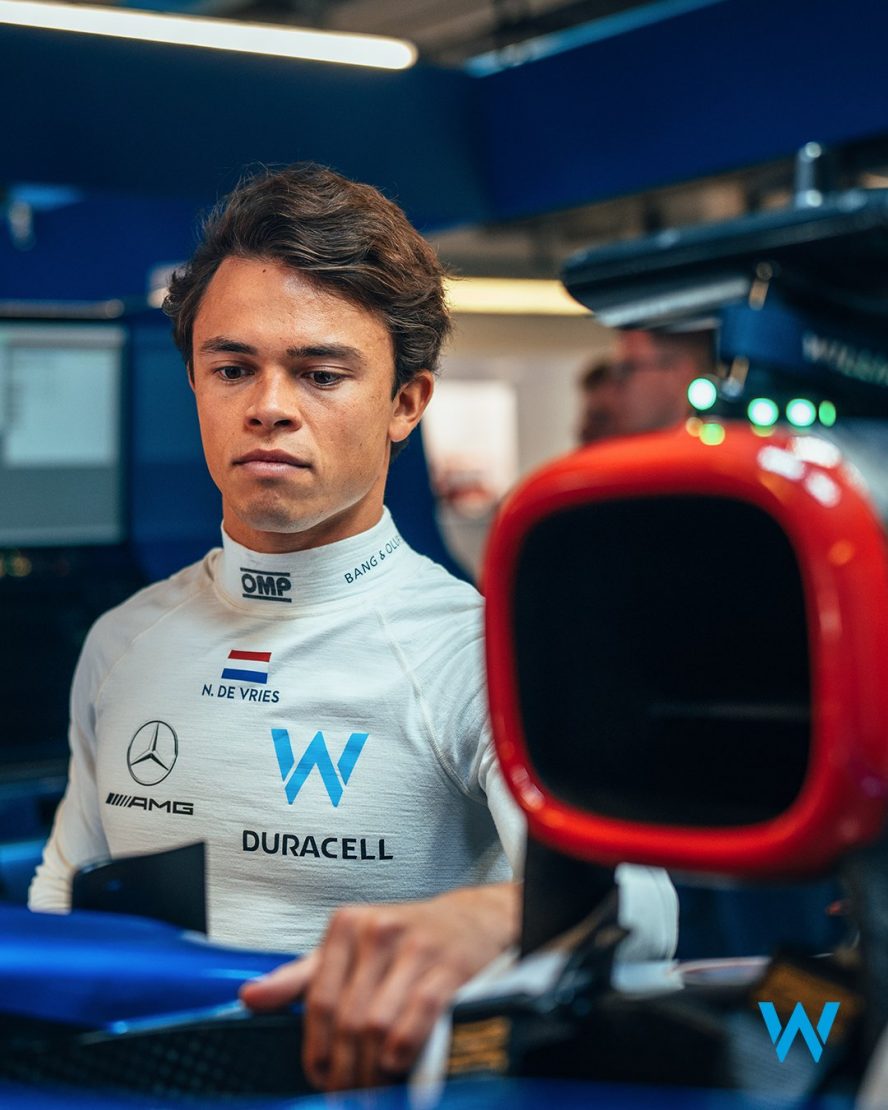 The Dutch driver has now driven for Aston Martin and Williams in the same weekend.

Nyck De Vries’s Monza schedule originally involved a P1 appearance for Aston Martin, before transitioning to TV duties with F1 TV for the rest of the weekend. Instead, as Alexander Albon pulled out due to appendicitis,  the Dutchman suddenly found himself moving garages ahead of qualifying. He swapped his green Aston Martin overalls for the blue of Williams.

With barely any time to prepare, the Dutchman showed impressive speed in the FW44. The car’s straight-line speed advantage helped the Dutchman stay off the final rows of the grid at Monza.  Equally impressive was his performance in a car that he had not driven before qualifying. De Vries qualified a superb P13, while regular teammate Nicholas Latifi ended qualifying in P16.

Speaking to formula1.com’s Will Buxton, De Vries reflected on his ever-changing weekend. Revealing he had a 90-minute warning that he would be driving the Williams in qualifying, the Dutchman said he wasn’t satisfied with his result despite his strong performance:

“We were supposed to do the Pre-Qualifying Show together. I was getting ready for it in the morning with my coffee and porridge and everything, doing a Paddock Club appearance, but things turn around very quickly. It was only, like, one and a half hours before the first session that I got informed.

“So, the turnaround was very quick, but the team has been great and very supportive. Obviously, I hope that Alex is healthy and will recover quickly but from my side I am never satisfied enough from myself,”

Following on from this, we can confirm that the team’s Reserve Driver Nyck de Vries will drive in place of Alex for the remainder of the Italian Grand Prix weekend. Alex is in good spirits and the team wishes him a speedy recovery.#WeAreWilliams #ItalianGP pic.twitter.com/4tgyGBD0BU

De Vries was on course to potentially reach Q3, but an error at the Variante della Roggia ended his hopes. He was just over two-tenths of a second clear of the cut-off time when he made the mistake. The Dutchman said it was an accidental hit of a switch that altered the brake balance of his FW44 that cost him the opportunity of a Q3 appearance:

“I think I put in some good laps, especially the second lap in Q1 was pretty good, but I still felt there was more in it. And then we made some changes in the first run of Q2 and that didn’t quite work out.

“Obviously, the tyre prep was a bit compromised on the track. And on the last run, I hit a switch which meant that the brake balance was like one and a half percent rearwards, and that’s how I kind of lost the rear into [Turn] 4! A bit gutted about that, but I think that I am allowed to take this anyway.”

Nicholas Latifi once again struggled and was outpaced by his temporary teammate. Admitting his frustration afterwards, the Canadian revealed he missed out Q2 due to not doing a lap on his second set of soft compound tyres.

“It’s frustrating,” said Latifi. “We felt we made a good step compared to yesterday, and ultimately, I just didn’t do a lap on the second set [of soft tyres].

“Again, just one of those – a bit similar, like Spa… probably one of two tracks where driving a lap at 95% would have been good enough to get us through to Q2, but you don’t know that until you cross the finish line.

“So yeah, it’s frustrating, but I’m where I expected to be, having not run a second set of tyres, so it is what it is.”