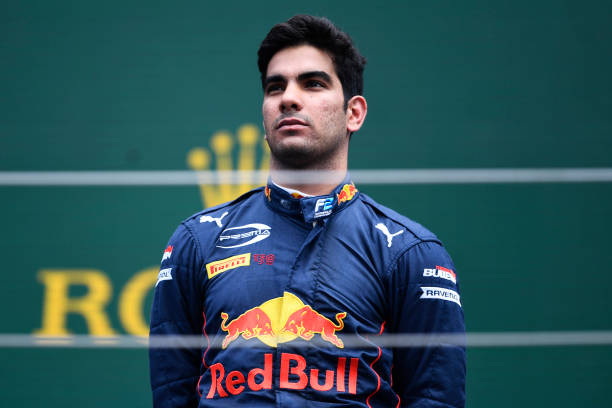 SPIELBERG, AUSTRIA - JULY 10: Second placed Jehan Daruvala of India and Prema Racing (2) celebrates on the podium during the Round 8:Spielberg Feature race of the Formula 2 Championship at Red Bull Ring on July 10, 2022 in Spielberg, Austria. (Photo by Rudy Carezzevoli - Formula 1/Formula Motorsport Limited via Getty Images)

Jehan Daruvala is jumping back into a McLaren in Portimao

Red Bull-backed Jehan Daruvala is set to test the MCL35M once again after impressing Andreas Seidl during his Silverstone test.

Jehan Daruvala recently tested for McLaren F1 at Silverstone. The Prema Racing driver, who is part of the Red Bull Junior Academy, made an announcement on social media yesterday.

The announcement confirmed that Darvuala would once again test the MCL35M as part of McLaren’s testing programme where their previous F1 cars are used. Daruvala will complete the testing at Portimao.

What is the TPC programme?

The test comes as McLaren has launched their Testing Previous Cars programme. McLaren’s Team Principal Andreas Seidl commented on the programme saying “It’s actually the first time for us at McLaren to run such a TPC car, which we were not in a position in the previous year.” He went on to add that this was possible due to regulation changes and their strong partnership with Mercedes.

Seidl addressed the intentions of the programme. He said, “we simply want to use this car now or this project in order to give young guys a chance to drive a Formula 1 car and also to show us or to put us in a position to evaluate what these guys can do.”

Seidl commented on Darvuala’s debut test earlier this month. He said, “I would say for him being the first time in a Formula One car, it was a very positive start with everything we have seen and a start we can build on now together.” He continued saying, “We have more test days planned together with him again which will help him get more familiar with a Formula One car, so that he can actually show what he can do. So so far so good I would say.”

Despite Seidl saying it’s “too early” to come to any judgement on Daruvala’s future, he has hinted at the possibility of an FP1 outing. He noted that McLaren “have further runs planned in the next month with Colton, probably with Pato again as well. And then we will make up our mind at some point about whom we want to give the chance to do also a free practice one session.”

Despite collaborating with McLaren Daruvala is still backed as a Red Bull Junior driver.  After Juri Vips was dropped from his test and reserve role, Red Bull had to assess their options.

Speaking on the topic, Team Principal Christian Horner commented “Obviously we’ve got quite a few youngsters and really promising youngsters that are out there at the moment.” He went on to add that despite testing with McLaren, Daruvala holds a strong position in the Red Bull talent pool. Horner concluded by saying:

“Jehan is doing a great job and we’re just following his progress with interest.”

With his options for his future lined up, Daruvala’s main focus will still be on the Formula 2 championship.

Daruvala currently sits fourth in the Driver Standings after losing out on P2 in Austria’s Feature Race due to a penalty. Despite this, he is the highest ranking Red Bull Junior, 13 points clear of teammate Dennis Hauger in P7.

After taking no points away from Austria, Daruvala will be looking for a strong comeback around Paul Ricard.

Formula 2 returns next weekend (22-24th July) for round nine at Le Castellet.