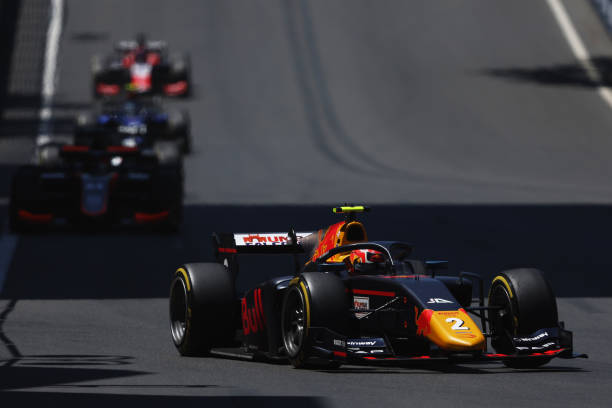 BAKU, AZERBAIJAN - JUNE 11: Jehan Daruvala of India and Prema Racing (2) drives on track during the Round 6:Baku sprint race of the Formula 2 Championship at Baku City Circuit on June 11, 2022 in Baku, Azerbaijan. (Photo by Bryn Lennon - Formula 1/Formula Motorsport Limited via Getty Images)

The PREMA driver is taking the first step to F1

Red Bull Junior driver Jehan Daruvala is set to make his Formula 1 test debut this week with McLaren. He will test for the team for two days at the Silverstone Circuit.

The Formula 2 driver took to Twitter this morning to announce his venture with McLaren. Daruvala will test the MCL35M as a part of their Testing Previous Car programme.

The PREMA driver will take to the British Circuit on the 21st-22nd of June for two days of testing. He tweeted:

“Super excited and grateful for the opportunity to have my first experience in a Formula 1 car testing with McLaren this week!”

Super excited and grateful for the opportunity to have my first experience in a Formula 1 car testing with @McLarenF1 this week!😀
A big thank you to the Red Bull Junior Team, my family, my support team, @MumbaiFalcons , McLaren and to everyone who’s supported me along the way! pic.twitter.com/JuiQBkYCHU

Daruvala made the move to the PREMA team from Carlin for the 2022 season. He is partnered with fellow Red Bull Junior, and former F3 champion, Dennis Hauger.

Daruvala currently sits third in the driver standings after taking points home from every round. He started the season of well after taking P2 in the first Sprint Race of the season in Bahrain. He however missed out on the points during the Feature Race after sustaining front wing damage and placing P14.

Jeddah proved a consistent point-scoring weekend for Daruvala after claiming P7 in the Sprint Race. He then went on to take the last podium place of the Feature Race.

Imola also saw Daruvala on the podium once again as he claimed P2 in the Sprint Race after an intense battle for the lead with Marcus Armstrong. Despite leading for most of the race, Daruvala placed P9 in the Feature Race. He did, however, manage to clinch the fastest lap despite moving down the grid.

Moving into round four in Barcelona, Daruvala had a strong start under the Spanish sun. He finished the Sprint Race in P4. The Feature Race, however, was one Daruvala would like to quickly forget. His race ended only three laps in after his engine cut out.

Monaco proved an incredible weekend for PREMA. The team claimed their first 1-2 of the season from the Sprint Race, Daruvala taking the latter of the podium positions.  Daruvala finished the Feature Race P8 after a slow pit stop left him unable to improve.

Round six in Azerbaijan saw Daruvala take to the podium once again. He finished P2 during the Sprint Race after being pipped to the post by ART Grand Prix’s Frederik Vesti. He added to this by placing P4 in the Feature Race after keeping a clean race. This made Baku the PREMA driver’s most consistent weekend taking home 20 points.

Daruvala’s consistency alongside his ability to stay out of trouble has kept the PREMA driver in championship contention. He currently sits only ten points behind Theo Pourchaire in P2 and 59 points behind championship leader Felipe Drugovich.

Formula 2 takes to Silverstone for round 7 (1st-3rd July). Here Daruvala will be hoping to continue his consistent run or even claim his first F2 victory of the season.