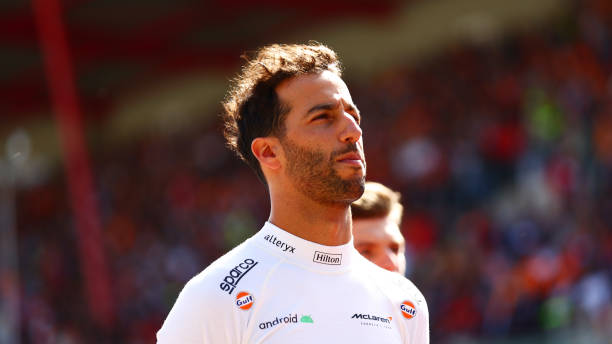 SPA, BELGIUM - AUGUST 28: Daniel Ricciardo of Australia and McLaren prepares to drive on the grid prior to the F1 Grand Prix of Belgium at Circuit de Spa-Francorchamps on August 28, 2022 in Spa, Belgium. (Photo by Dan Istitene - Formula 1/Formula 1 via Getty Images)

Daniel Ricciardo has already confirmed he will not be on the grid in 2023, but the F1 rumour mill is buzzing with a potential move to Mercedes or Red Bull as a reserve driver.

As an 8-time Grand Prix winner, there once was a time when Daniel Ricciardo was in high demand. But after a disastrous run with McLaren, the Aussie is taking a step back from a full-time race seat, with the view of making a heroic return in 2024.

In an effort to get back to the front of the grid, Ricciardo has reportedly spoke to “a few teams” about a potential reserve driver role, most notably Mercedes and Red Bull.

“For us, we very much like him, he’s a great character,” said Mercedes CEO Toto Wolff told Autosport. “But we are not in a position yet to decide who is going to be reserve and third driver.”

Former F2 and Formula E champ Nyck de Vries was Mercedes’ previous reserve driver, but after an impressive performance at Monza and several FP1 outings, the Dutchman has been snapped up by AlphaTauri for 2023.

Wolff added: “His personality and experience in F1 would be really advantageous to any team that worked with him next year. But I don’t want to put any rumours out there, because we haven’t decided.”

Ricciardo himself is aiming to hit the reset button after failing to perform at McLaren since his move from Renault at the end of 2020. Despite falling short against his teammate Lando Norris, Ricciardo has shown glimpses of brilliance, winning at Monza in 2021 and most recently claiming a P7 finish in Mexico – both worthy driver of the day performances.

“I want to take the time necessary, keep a little bit of distance to the sport, and, let’s say, rebuild myself,” Ricciardo told Autosport. “But then yeah, if something makes sense in ’24, come back with a vengeance and have some fun and hopefully race at the front.”