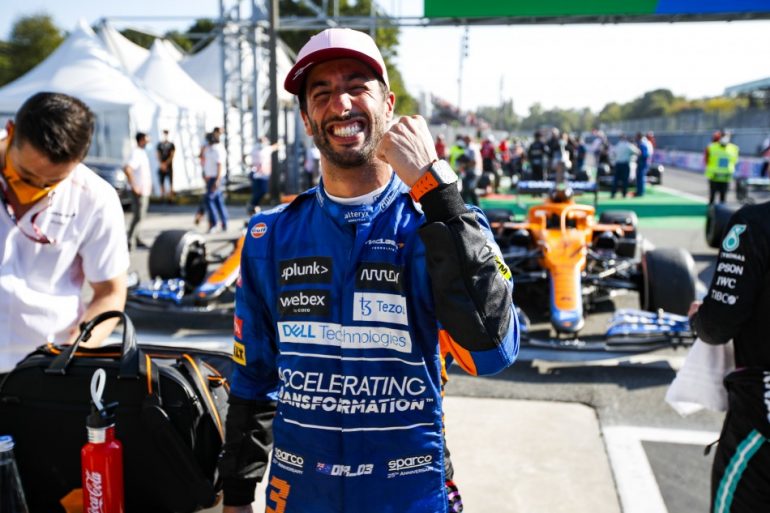 Despite the difficult start to his first season with McLaren, Daniel Ricciardo looks ahead of the time he has left in Formula One. The 32-year old joined the Woking-based team from Renault, which have been rebranded to Alpine. The move came after Carlos Sainz confirmed his Ferrari seat for 2021.

The Australian had a bumpy start. He was outqualified by his younger teammate Lando Norris on several occassions, and barely got much points during the first half of the season. That was until in Monza, the pair went on to achieve a 1-2 with Ricciardo finishing first. It was the only 1-2 achieved in the 2021 season throughout all the teams, and it gave Ricciardo the confidence boost that he needed.

It was not only the podium that helped. Behind a great driver, there is a great team ready to help and be there for the driver. The McLaren Team have been very supportive and patient with Ricciardo, which added more to his confidence on what he can do out on track. The trust that McLaren have put in Ricciardo, made him even more excited for what can happen in future seasons.

He said in an interview with Auto Motor und Sport, “It’s always like that. Don’t get me wrong, I think that’s part of the challenge in Formula 1 and as a driver. You don’t just strive to be fast, you strive to be in the best car. But I am not in the hunt here. Of course, I’ve been around a bit in the last three or four years. Because I like the environement at McLaren so much and I enjoy it so much, I really want to make this project work. I want to be here.

“The surroundings fit as well. I like the brand, I like the road cars. I can say that I really like being part of this company, part of the McLaren family. The reason why I’m not remotely thinking about another team or beyond my future is that I actually won in maybe the hardest year of my career. So my thought is: if I win in a year like that, what does that say about the journey ahead? I am definitely excited and I want to be here, possibly until the end of my career.”

And it was one of the most difficult seasons in his career: he once again had a younger driver as his teammate, who is probably seen as the future of the team; he had to adapt to a Mercedes engine; he had to meet all these people and learn how to work with them, while also being restricted from even visiting his family and friends becase of the strict Covid-19 travel rules that Australia has in place.

While Ricciardo would like to stay with McLaren till the end of his Formula One career, one has to think about what lies on the other end. Would McLaren be ready to keep the Australian on? Or do they want to bring in a rookie and keep building a young and dynamic team to dominate the future of Formula One?

Or maybe Lando Norris might bid farewell to McLaren, and join Mercedes when Lewis Hamilton retires. It would be a good Brit vs Brit dual for sure. And as for McLaren, they would look to sign another rookie that can learn from Ricciardo.

Many possibilities and as we know anything can happen in F1.