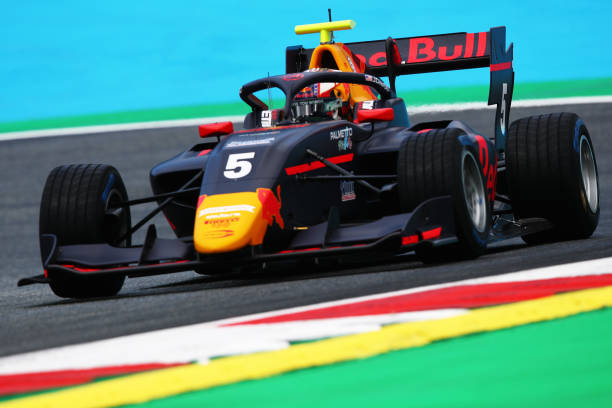 SPIELBERG, AUSTRIA - JULY 08: Jak Crawford of United States and Prema Racing (5) drives on track during practice ahead of Round 5:Spielberg of the Formula 3 Championship at Red Bull Ring on July 08, 2022 in Spielberg, Austria. (Photo by Joe Portlock - Formula 1/Formula Motorsport Limited via Getty Images)

Red Bull backed Jak Crawford was the man to beat around the Red Bull Ring in today’s Sprint Race.

The PREMA driver took his maiden Formula 3 win. Caio Collet secured his best result of the season so fat finishing P2 as Franco Colapinto held off Arthur Leclerc for P3.

Following a very clean start, Collet keeps the lead for the first few corners. He however is put under pressure from Juan Manuel Correa who passes at Turn

The safety car is swiftly brought out after Rafael Villagomez was spun off at turn three.

Moving into lap four the safety car comes in, Correa controlling the restart.

Further behind in the field the three Trident cars battle for P5 going three cars wide into turn four. Zane Maloney takes the upper hand in the battle claiming P5.

Moving into lap six, race leader Correa begins to slow on the main straight allowing Collet to take the lead. Correa falls to the back of the field after being affected by what appeared to be mechanical failure.

Throughout lap seven Arthur Leclerc began his charge through the field battling with Kaylan Frederick for P8.

Oliver Bearman sees the perfect opportunity on lap eight passing Roman Stanek after pushing him wide. This left Stanek vulnerable to Leclerc who also passes him to take P7.

The virtual safety car is brought out as William Alatalo pulls off the track.

As lap 13 ends the safety car comes in Collet controlling the restart once again, Jak Crawford putting pressure on him after taking P2 shortly before the safety car.

Following a similar path to his teammate, Leclerc passes Johnny Edgar on lap 15, moving him up to P4.

Further behind Bearman is battling with championship leader Victor Martins, however, remains behind.

Moving into lap 17 Edgar gets passed by Stanek in the battle for P5.

After track limit violations Bearman is handed a five-second time penalty to add to the PREMA driver’s woes.

Enzo Trulli is also handed a ten-second stop-and-go penalty for speeding in the pit lane.

As the action continues on the track Frederick passes Edgar on lap 18.

Up front, Leclerc caught up to the front of the field battling with Franco Colapinto for P3 however he was unable to make the move finishing P4.

With Crawford leading Collet was catching however he was unable to pass, seeing Crawford claim his maiden F3 win.

The top ten classified as follows:

The championship battle is heating up as Leclerc goes into tomorrow’s Feature Race with only a point separating himself and Victor Martins.