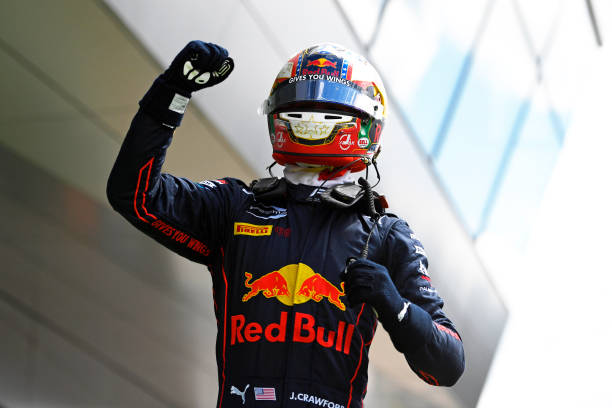 Crawford: “I have high expectations for the last three rounds”

Can Crawford take the title?

With Isack Hadjar and Victor Martins tied at 104 points at the top of the championship, Jak Crawford sits in P4 on 80 points. He currently sits 24 points behind the leaders and 15 points behind teammate Arthur Leclerc in P3.

So far this year, Crawford has taken away two race wins and three podiums. Despite a strong season, Crawford reviewed his second F3 campaign as a “seven out of 10” when speaking to Formula 3.

Crawford reflected, saying: “I think the strongest aspect of the season so far has been my race pace by far. I think the car really suits me for the race and I’ve been really quick in race scenarios and in general race pace with tyre degradation.”

Over the season, Crawford has only managed two top five starts, P3 in Imola and P5 at Silverstone. Despite this, Crawford feels his second season in Formula 3 has been beneficial, saying “I’ve already learnt quite a lot…I think the main thing that I’ve really learnt how to do better is my race craft in general. I’ve learnt how to be a better racer, make smart and calculated passes but also to be aggressive at the same time.”

Crawford acknowledged an area of improvement that he could work saying. He said “the weakest aspect so far has been Qualifying, even though it’s not bad, it’s not great.” Elaborating on this, he said that that will be the “main part to focus on.”

However, the young American did comment on the positives of this season over the first six rounds. He said:

“Everything has been really strong, so that’s where as a team and as a driver I’ve been strongest.”

Going into the final rounds of the championship, Crawford has “high expectations” as he has previously had success at the up-coming circuits. Reflecting on last season, he commented “Spa is where I took my first podium in F3 last year in the wet.”

By Jasmine Hughes7 days ago

He added that “Zandvoort is a place where I’ve had good success and then we’re back in Italy for the final round, so it’s going to be a crazy three weeks in a row but I’m really looking forward to it.”

With 117 points up for grabs over the last three rounds, the field remains very competitive. Crawford sits in a very strong position in P4.

“I think we’ll be really quick so hopefully we can make a Championship charge. Hopefully, I can put it all together and get up there.”

Formula 3 returns for round seven at Spa next weekend. All eyes will be on the top five to see who comes out on top over the weekend.