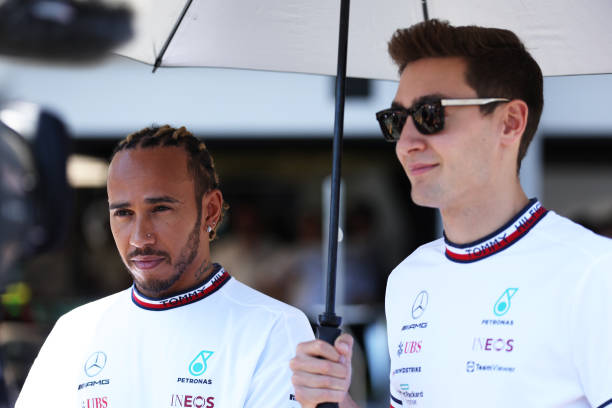 Could Mercedes dominate at “smooth” Silverstone?

The British Grand Prix could be the “smooth” home race Mercedes are aiming for.

Mercedes have dominated during the hybrid era, but 2022 has not been their year. Coming back after an eighth Constructors’ Championship win, the team have struggled significantly.

The new cars and regulations have caused problems for the Brackley outfit and their usual success at a ‘perfect’ car is yet to be achieved. Porpoising, as well all know, has been their main enemy. However, after some upgrades, the W13 seems to be performing a lot better than it was. In Canada, Hamilton managed to achieve his second podium of the season.

With porpoising being a massive obstacle for the team, they have taken each race a step at a time. They are currently third in the Constructors’ Championship. George Russell and Lewis Hamilton are currently fourth and sixth in the Driver standings respectively.

Russell has had a consistent season so far, but Hamilton’s has been quite varied. In five of the nine races, he has finished in the top five with P3 being his highest finish. He has also finished outside the points on one occasion back in Imola where he finished P13.

Now heading into Silverstone, both Hamilton and Russell’s home race, things could be looking to improve even further. CEO of Silverstone, Stuart Pringle, has said that because the circuit is smooth, porpoising shouldn’t be an issue for Mercedes. If there is porpoising, then Pringle believes it is down to something other than the track, which is “smooth as a baby’s bottom.”

The smoothness of the track could definitely play into Mercedes hands. The W13 has been seen to perform better on a smoother track with more traditional layouts than others. We saw in Baku and Canada the difficulties it had with the bumpy surfaces. In Baku, the situation was rather dire as Hamilton suffered severe back issues that saw him struggle to exit the cockpit of his car.

“You wait, I think Mercedes aero is going to come into its own in this one which will be great because we’ve got George and Lewis at the front for the British fans.”

Team Principal of Mercedes, Toto Wolff has also shared his thoughts on this weekend. He commented saying he “would hope” that the team can compete at Silverstone. Wolff reflected on past experiences, saying that the circuit “was good to [them] in the past” and “is smoother than the last three ones.”

He continued saying they “should manage [their] own expectations and just really grind away.” They need to “look at the data and come up with sensible solutions, not only for Silverstone but going forward as well.”

He concluded saying: “If we are able to run the car low then we can be competitive.”

Silverstone is not just Hamilton and Russell’s home race, but Lando Norris’ as well. The young Brit has had a mixed year so far with a podium in Imola but also a DNF in Miami.

He will be looking to gain as many points as he can this weekend to push the team further from the midfield. McLaren are currently fourth in the Constructors’ Championship, eight points ahead of Alpine.

Will we see the gap between McLaren and Alpine increase? And will Mercedes be dominant at Silverstone once again?