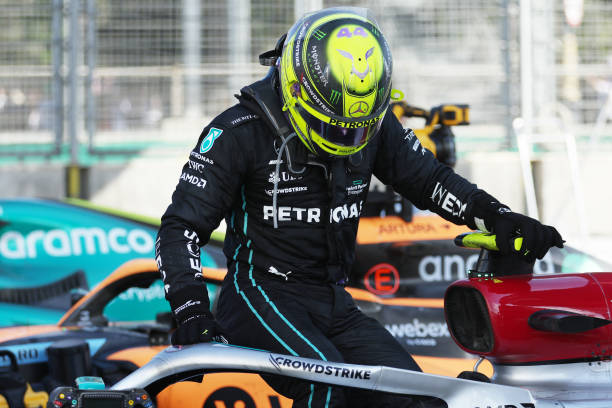 BAKU, AZERBAIJAN - JUNE 12: Fourth placed Lewis Hamilton of Great Britain and Mercedes climbs from his car after complaining of pain during the F1 Grand Prix of Azerbaijan at Baku City Circuit on June 12, 2022 in Baku, Azerbaijan. (Photo by Bryn Lennon - Formula 1/Formula 1 via Getty Images)

The Mercedes driver was in a lot of pain following the race in Baku.

Following severe back pain due to porpoising in the Baku Grand Prix, Lewis Hamilton could be unable to participate in the race in Montreal this coming weekend.

Back pain in Baku

The Mercedes drivers finished third and fourth in today’s race at Baku, but it was hardly an easy task for George Russell and Hamilton. The bumpy track combined with the low ride height of the Mercedes W-13 caused them both a lot of pain during the race.

“I can’t express the pain that you experience, particularly on the straight here,” Hamilton told Sky Sports after the race. “And at the end, you’re just praying for it to end.”

Hamilton complained of back pain during the race, and it was clear that the porpoising had caused major issues. After the race, Hamilton took his time getting out of his car, and was visibly struggling to walk or move.

Porpoising has been a problem on some level for all of the Formula 1 teams this year, but none as much as the reigning Constructor’s champions. While Russell has managed to be the only driver to finish in the top five every race this season so far, he’s paid the price for it with a great deal of discomfort.

The porpoising that the Mercedes car is experiencing has been a huge talking point all season, coming to a head now as the physical wellbeing of the drivers is coming into question.

When asked by the media, Mercedes team principal Toto Wolff was doubtful that Hamilton will be cleared to race by this weekend for the Canadian Grand Prix.

“I haven’t seen him and I haven’t spoken to him afterwards,” Wolff said at the time. “But you can see this is not muscular anymore, it goes properly deep into the spine and there are some consequences.”

The solution could be to have someone on reserve, which we anyway have at every race, to make sure that our cars are running.”

With the Baku and Canada races being a double header, Hamilton has almost no time to recover or take a break, which could be the main problem if he misses the next race.

As far as who Hamilton’s replacement would be, Mercedes would likely call up either Nyck de Vries or Stoffel Vandoorne. The two of them make up the Mercedes Formula E team, and also function as reserve drivers for Formula 1. They’ll be on standby in case Hamilton isn’t cleared or able to race in the few short days leading up to the Canadian Grand Prix.