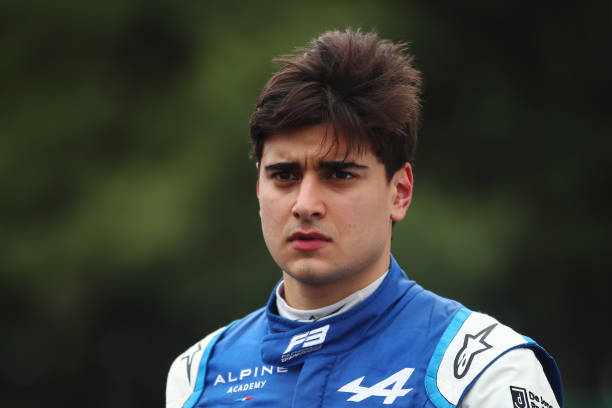 IMOLA, ITALY - APRIL 22: Caio Collet of Brazil and MP Motorsport (10) looks on during qualifying ahead of Round 2:Imola of the Formula 3 Championship at Autodromo Enzo e Dino Ferrari on April 22, 2022 in Imola, Italy. (Photo by Joe Portlock - Formula 1/Formula Motorsport Limited via Getty Images)

A gamble on tyre choice in Imola cost MP Motorsport’s Caio Collet his first win, dropping him outside the top 10.

The Brazilian driver’s weekend seemed to start strong as he took the lead by the end of lap 4.

He continued in first place under safety car conditions, after Zak O’Sullivan and Pepe Marti had consecutive incidents that saw them both finish the race in the barriers.

Collet’s promising race came to an end when Franco Colapinto passed him for the lead. Things went from bad to worse when he made contact with Isack Hadjar in third, leading to a DNF.

He referred to his day as “frustrating” as he failed to score points.

In an attempt to move on from the previous day’s disastrous finish, Collet and his team took a risk on tyres.

With the track still damp at the beginning of the race, he was able to charge through from ninth to take the lead.

Collet managed to build an impressive four-second gap in the early stages of the race.

However, it soon became clear that his gamble was the incorrect choice.

The track began to dry out, forcing Collet to pit for slicks. Emerging in 13th place, he was only able to recover to 11th.

Speaking about the result, he said: “We took a gamble with the tyres, me and the team, and in the end it was not the best decision we could have done, but we made a mistake together and we will learn from it.

By Jasmine Hughes4 days ago

“Even though I led most of the race I threw away at least a podium for nothing, so this is one thing I need to learn if I want to fight for the championship, as I threw away a lot with a stupid decision I took,” he continued.

After failing to score points since the sprint race in Sakhir, Collet explained that “these small decisions we take, and mistakes, cost us a lot of points so this is what we need to redress and do it right in Barcelona.”

F3 returns on 20th May at the Circuit de Barcelona-Catalunya. Victor Martins and Arthur Leclerc are currently joint championship leaders and they will continue to battle under the Spanish sun.

Caio Collet has plans to remain optimistic. He said: “The first two rounds of the championship didn’t go as planned, it’s far from what we expected. We need to regroup and come back in Barcelona.

“We had a bit of everything the first two rounds, so I just want a normal and consistent round to at least score a few points and build up something to start again, this is what I aim to do.”