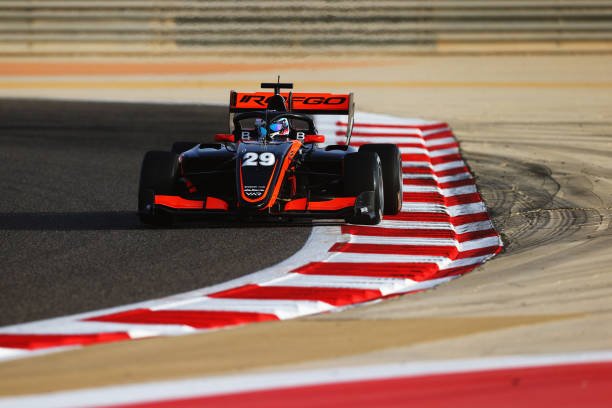 BAHRAIN, BAHRAIN - MARCH 18: Franco Colapinto of Argentina and Van Amersfoort Racing (29) drives on track during qualifying for Round 1:Sakhir of the Formula 3 Championship at Bahrain International Circuit on March 18, 2022 in Bahrain, Bahrain. (Photo by Dan Istitene - Formula 1/Formula Motorsport Limited via Getty Images)

Colapinto claims pole ahead of Stanek for F3 Sakhir GP

The session began with drivers battling to find space on the track, as Carlin’s Zak O’Sullivan set out at the front of the pack.

Following the first round of fast laps, Gregoire Saucy, racing for ART Grand Prix, found himself at the top with a time of 1:46.978.

The top 19 drivers were separated by just one second, providing a promising glimpse into what should be a competitive season.

Halfway through, it looked like no one was challenging Saucy’s time. This all changed when MP Motorsport’s Alexander Smolyar leapt up to first with an impressive 1:46.642 (over three tenths faster than Saucy’s previous effort!).

Looking further down the timesheets, there seemed to be concerns in the Prema garage. Jak Crawford, who was sitting comfortably in 8th position, had the bodywork of one side of his car dismantled. The problem was quickly solved, but he dropped to 21st.

The second round of fast laps began with the news that Kush Maini, who ended up setting the third fastest time, will be investigated after the session for missing the weigh bridge.

As the track continued to cool, there was a chaotic rush as drivers set out to improve their times. The high volume of traffic caused issues for some, as Smolyar lost time on his final lap after being forced to brake.

It was in this final run of laps that Colapinto found enough space and speed to take a maiden pole position that no one was expecting.

He will line up at the front on the grid for Sunday’s feature race, but will find himself in 12th position in tomorrow’s sprint. In a format new to the 2022 season, the top 12 finishers in qualifying will be reversed to form the grid for the sprint race on Saturday.